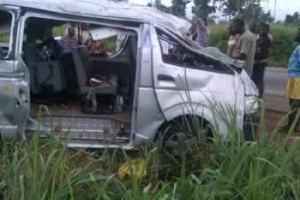 The Federal Government Friday expressed shock and sadness over the death Thursday of the Senate President of the National Association of Nigerian Students, Donald Onukaogu and four others in a ghastly auto crash along the busy Umuahia-Ikot Ekpene road.

Onukaogu and the other NANs officials were on their way to meet with students of University of Uyo who were protesting a new transport fare regime introduced by the school’s administration when they met their untimely death.

Minister of Education, Prof. Ruqayyatu Ahmed Rufa’i in a statement from the ministry Friday in Abuja said “the passing of the NANS leaders in such manner was painful.”

Rufa’i who described the late Onukaogu as a committed leader, noted that he worked for the peaceful coexistence of Nigerian students at all levels in his capacity as the leader of the parliamentary arm of NANS.