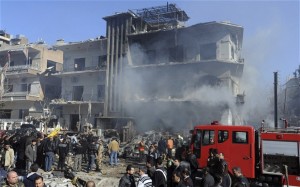 Fighting has erupted in Syria’s capital Damascus and the northern city of Aleppo, a day after world powers pledged to increase support to the Syrian opposition.

In Damascus on Sunday, rebels launched an attack on a police post in the northern part of the city, which left four policemen and three fighters dead, a watchdog said.

Bombs also hit the capital, with at least two people reported to have died in a central Mazzeh 86 area, said the Syrian Observatory for Human Rights watchdog. Mazzeh 86 is home to members of President Bashar al-Assad’s Alawite minority.

Meanwhile, French President Francois Hollande said Syrian rebels should retake zones which have fallen into the hands of extremist groups to limit the success of Assad’s forces.

Speaking in Doha on Sunday after meeting world powers to discuss the conflict, he said: “The opposition must retake control of these areas and push these groups out.”

If extremist groups “benefit from the chaos in future, Bashar al-Assad will seize this as an excuse to continue his massacres”, Hollande said.

On Saturday, western and Arab countries agreed to give urgent military support to rebels fighting Assad’s forces, and to channel that aid through a western-backed rebel military command.

In a statement following talks in Qatar on Saturday, ministers from 11 nations in the Friends of Syria group agreed “to provide urgently all the necessary materiel and equipment to the opposition on the ground”.

Their final statement also condemned “the intervention of Hezbollah militias and fighters from Iran and Iraq”, demanding that they withdraw immediately from Syria.

The ministers said the growing sectarian nature of the conflict and the foreign interventions “threaten the unity of Syria [and] broaden the conflict” across the region. They also expressed strong concern at the increasing presence of “terrorist elements” and growing radicalisation in Syria.