We relieve the last moments of the late Chief M.K.O. Abiola  publicly by the man who should know: Assistant Superintendent of Police (ASP) Theodore Bethnel Zadok, who for the two years before the chief’s death was in charge of his living and imprisonation in government custody. 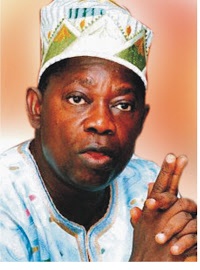 Zadok in his evidence-in-chief at the hearing of the petition by Abiola’s first son, Kola and physician, Dr. Ore Falomo, related how he was apparently handed away from Chief Abiola, and by the time he returned to him, he had been offered tea, only to be dead a few minutes thereafter.

Reading from a prepared text, the police officer said: “I was posted to head the detention base of Chief M. K. O. Abiola with about thirteen (13) body guards under me. and since the day I took over the duties of the detention camp of Chief M. K. O. Abiola I was responsible for collecting the sum of N800,000 (Eight Hundred Thousand Naira) quarterly from Major Hamza Al-Mustapha to the commissioner of police FCT command Abuja for his feeding.

That is three times a day subject to what he wanted to eat. I also took care of his health by seeing the Doctor any time he complained of any illness. In view of this he never ate any food or drank any thing without me tasting it first before giving it to him to eat or drink.

“The Chief Security Officer Major hamza Al-Mustapha ordered me to give Chief MKO Abiola Koran and Bible for reading and I used to collect some money from the Chief Security Officer to buy some newspapers and magazines for the chief to read, and also give the chief some plain sheets for anything he might wish to write. My lord, Chief MKO Abiola never believed that I was a Security man who came to guard him, but a son who came to take care of his father. I will like to support this statement with a written note, written to me by Chief MKO Abiola.

“On the 8th day of June 1998 the day the Head of State General Sani Abacha died the chief Security Officer Major Hamza Al-Mustapha ordered me along with Lt. Ikilama to move Chief MKO Abiola from Kado Housing Estate to Gado Nasko Barracks and from there all the 13 body guards attached to me were withdrawn except the driver and leaving the soldiers of the Guards Brigade to take over the guard.

But I was still left behind to be bringing food to Chief MKO Abiola as usual from the police officers mess Wuse Zone 7. Chief MKO Abiola was informed of the death of General Sani Abacha and the appointment of General Abdulsalami Abubakar as the Head of State and Commander-in-Chief. he wrote letters to general Abdulsalami Abubakar and the service Chiefs gave them to me to Photostat them for him.

He gave me some copies to give to Major Hamza Al-Mustapha and passed the rest to the respective owners. After the expiration of the second quarter allocation of N800,000 (Eight Hundred Thousand naira) I approached Major A. S. Aliyu Chief Security Officer to General Abdulsalami Abubakar to collect the money for the next quarter. He only told me he had heard me.

“On the day in question, the 7th Day of July 1998 at about 11.30hrs, the Chief Security Officer to General Abdulsalami Abubakar, Major A. S. Aliyu called me on the radio set, asking me to see him in his office. I then proceeded to his office and he instructed me to bring Chief MKO Abiola to Aguda House for an interview to be held by 1300 hrs.

“I then went back to the base and informed Chief MKO Abiola of the interview and he asked me whether Major Hamza Al- Mustapha was aware of the said interview. I told him didn’t know because Major Hamza Al-Mustapha was busy handing and taking over but I would see if I could locate him to inform him.

“He asked me to bring his dresses which he would wear and also asked me to give him 30 minutes to enable him get dressed. At about 1230hrs the Chief Security Officer to general Abdulsalami Abubakar Major A. S. Aliyu came to the base. To the best of my knowledge, that was the first time he knew that place, wanting to know if we were ready and I replied him almost ready. As we opened the door the Chief was already waiting for us. Together we went out and headed to Aguda House, venue of the Interview”.

“Before we all left the base, chief MKO Abiola was in sound and healthy condition. He did not complain to me of any illness. About 100 metres from the door stand of the Aguda House, the controller from the control room called me on the radio set and said, I quote, “30 BRAVO your LOG I answered ALFA GOLF UNIFORM DELTA ALFA, HOTEL. And he said MAIG SYRIA GOLF from the OSCAR FOXTROT FOXTROT OF CHARLIE OSCAR GOLF SYRIA you should ROMEO PAPA TANGO to see the subject INDIA MIKE MIKE I answered RECEIVED.”

“As we arrived at the Aguda House door step, I led Chief MKO Abiola inside the house and I took permission from the Chief Security Officer to General Abdulsalami Abubakar, Major A. S. Aliyu in whose custody I left Chief MKO Abiola.

“He asked me to use his vehicle, leaving my vehicle at the door step where it was parked. I then took his vehicle as entrusted and left to see the Chief of General Staff Admiral Mike Akhigbe at about 1310hrs and I came back from seeing Admiral Mike Akhigbe at about 1350hrs, only to discover that my vehicle was not there at the parking spot. On arrival, I saw one of my Body Guards Sunday Pada standing by the side of the door.

“I quickly went inside and I saw Chief MKO Abiola lying on the floor facing down. I called him. for the first time he answered, and I lifted him up and turned him upside and called him again for the second time he did not answer. At that time doctor Sadiq Sani Wali from Aso Clinic arrived and about examining the chief.

I told him we should rush the Chief to the clinic for proper treatment. Myself, the Chief Security Officer, Major A. S. Aliyu, Doctor Sadiq Sani Wali and the two white men standing lifted Chief MKO Abiola into my vehicle outside for onward movement to Aso-clinic.

Before getting to Aso-Clinic I saw Dr. Sadiq Sani Wali pressing his (Abiola’s) stomach up and down a kind of resuscitating him. As we arrived the clinic, Chief M.K.O. Abiola was rushed to the Emergency Room where I stood by with the doctors including the two white men and the Chief Security Officer Major Aliyu until when Dr. Sadiq Sani Wali later confirmed to us that Chief M.K.O Abiola was dead.

“We came out of the Emergency Room and the Chief Security Officer Major A. S. Aliyu phoned the villa, I heard him saying to the ADC please, connect me to the Head of State I have an important message for him. For about three minutes they continued the discussion with the Head of State while he was moving towards his vehicle outside. So I didn’t hear what he was discussing with the Head of State. After the phone call, we both left for the villa,

“The questions to ask are:

Who gave Chief M.K.O. Abiola tea in my absence?

Who tasted the tea before giving it to him?

And in whose presence was the tea tasted?

“The questions are for the Chief Security Officer to General Abdulsalam Abubakar; Major Aliyu to answer. And I want to testify before this Honourable Commission that on the 6th day of July 1998 at about 2200hrs Kola Abiola the son to late Chief M.K.O. Abiola his step mother; and about three of his sisters were with their father at Aguda House until 0130hrs of 7th July, 1998. I want to say categorically here that his father Chief M.K.O. Abiola was in a sound and healthy condition.

“Based on the statement made to the Commission by Femi Falana on the 5th day of July 2001 that Chief M.K.O Abiola was driven from Kano State to Abuja where he said that the Chief fell inside the Black Maria four times before arriving Abuja is totally false, because to the best of my knowledge Chief M.K.O Abiola was never detained out of Abuja.

“On the 28th day of July 1998, I collected, from the Commander Brigade of Guards, Gado Nasko Barracks, the late Chief M.K.O Abiola’s property and handed them over to Alhaji Babagana Kingibe on the 31st day of July, 1998 who ordered his orderly Sergeant Mustapha Gana to check, sign and collect the property from me and he, Babagana Kingibe, made a contact call to the family of Chief M.K.O. Abiola to come forward and collect the said property.