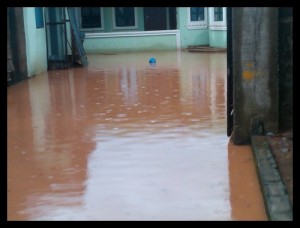 Imo Hotels, Owerri, building where Owerri Urban Customary Court is situated, was yesterday submerged with flood lead to cancellation of the day’s proceedings.

The flood came on the heels of a torrential rain experienced which lasted for several hours on Monday.

The flood was said to have been caused by tampering of the top soil by the contractor handling a government project in the premises.

A staff of the court who spoke in anonymity said: “The contractor bulldozed the top soil of the area and ended up creating a basin around the court building. The courtroom is flooded and no one can even get close to the door.

“You have seen what we are facing. Can anybody work in this type of condition? Except you tell the world what you have seen, nobody will get to know that we cannot get our jobs done for no fault of ours”.

The lawyers were seen in groups discussing the incident, after which they agreed to take fresh dates for their matters, while the court officials who were also at the scene obliged.