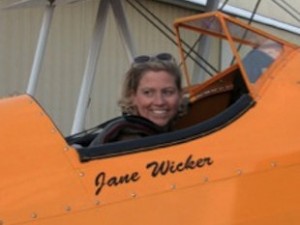 The stuntwoman who died in a terrifying air show crash on Saturday had planned to marry aboard a wing of the same small plane that burst into flames before thousands of horrified spectators.

The New York Daily News reports that 44-year-old Jane Wicker, a budget analyst and “wing walker,” had announced on her website that she planned to marry her fiancé and fellow wing walker, Rock Skowbo, 48, in an airborne ceremony. They were scheduled to take their wedding vows while standing on the wing of the same biplane that crashed during the Vectren Air Show near Dayton, Ohio, on Saturday.

Charlie Schwenker, 64, who also died in the plane crash, was set to fly the plane during the couple’s gravity-defying ceremony, while simultaneously serving as the minister.

Wicker and Skowbo, who met in 2010, were reportedly looking for a sponsor to help fund the ceremony, which was to be performed in front of an audience.

Wicker had a long history performing similar wing-walker stunts at air shows. According to her website, she became enamored with the sport after attending a Flying Circus air show in 1989. Just a year later, she was embarking on her own 12-year career as a member of the Flying Circus.

In addition, Wicker was an accomplished pilot, who held a low-level flight certification from the FAA and competed in a number of aerobatic flight competitions.

The Vectren Air Show resumed after a moment of silence on Sunday. Authorities are still trying to determine what caused the fatal crash. The 450 HP Stearman plane was in the middle of a planned stunt. Walker was on top of an upside-down wing when the plane suddenly veered downward and burst into flames upon impact with the ground.

“I noticed it was upside down really close to the ground,” Shawn Warwic, who was in attendance on Saturday, told the AP. “She was sitting on the bottom of the plane,” he said. “I saw it just go right into the ground and explode.”

Observers say Schwenker likely saved dozens of lives by veering the aircraft away from the spectator stands just moments before it crashed.