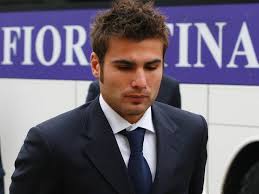 Disgraced former Chelsea star Adrian Mutu wants to adopt the baby who was flushed down a toilet in China.

The 34-year-old striker, kicked out of Stamford Bridge in 2004 for taking cocaine, said he hopes to approach officials about the plan.

He spoke as the tot was released from hospital and taken home by his grandparents – six days after being cut free from the four inch pipe.

Dad-of-three Mutu, who now plays for Corsican-based French team AC Ajaccio, told a TV station in his native Romania: “When I saw the baby I said, ‘I must adopt him, he has been sent to me by God.”

However, the footballer is in for a massive disappointment as Romania is not on the list of 17 countries whose citizens can adopt from China.

The baby was today being looked after by his mother’s parents at their home. She is still in hospital with a fever.

A man also came forward claiming to be the father and asked for a ­paternity test.

The boy will be reunited with his 22-year-old mum when she is discharged and the man revealed he also wants to help bring him up.

One official said: “The baby was taken by his mother’s family. His father’s family went to the hospital too. The baby left in good health condition.”

The unnamed mum gave birth to the tot, known as Baby 59, on Saturday over a squat toilet at the block of flats where she lives in Pujiang.

She claims he accidentally slipped down the pipe and she tried to rescue him with a broom but he got stuck.

Police accepted her story and she will not face prosecution.

Firefighters found the baby wedged in the pipe and covered in sewage. He suffered a small skull ­fracture and grazes when cut free.

His mum got pregnant after a one-night stand with the dad. She could not afford an abortion.

Babies are often dumped in China because of upbringing costs and the stigma of being an unmarried mum.