Former governor of Bayelsa State, Timipre Sylva, today breached President Goodluck Jonathan’s security, walking up to the Nigeria leader at the high table of a wedding party and shaking hands with him. 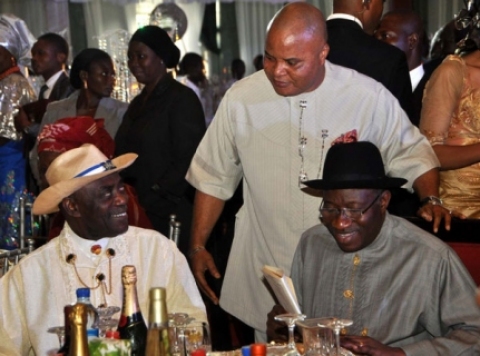 The occasion was the public wedding reception of a daughter of another former governor, Peter Odili. A security source told Sahara Reporters both the security and protocol of the President were taken aback by Mr. Sylva’s action, as he approached the high table while the president was already seated with other guests, however, they claimed they knew the president was not in any danger.

A source close to Mr. Sylva said he only went to greet his next-door neighbor and celebrant, Mr. Odili and that he (Sylva) used that opportunity to say ” hello ” to the President as a form of courtesy. ” It was a chance meeting between the two, there is no reason to impute any motive, when Mr. President asked Sylva how he was doing he said he was still alive and left to his seat afterwards, ” said the source that witnessed the incident.

Sylva, the former governor of Bayelsa State, is facing corruption charges initiated by the Economic and Financial Crimes Commission.

Mr. Sylva has repeatedly stated that his trial was motivated by his political disagreements with Mr. Jonathan. He was prevented from running for a second term in office by Mr. Jonathan, who then imposed upon the state as governor, his protege, Seriake Dickson.

Political observers say that today’s event also reflects the intricate connections between power and corruption in Nigeria. Odili is widely-known to have looted the resources of Rivers State during his tenure as governor, but has never been prosecuted because of a perpetual injunction he obtained for self-protection.

Although all of that information must be in the hands of President Jonathan, who claims to be fighting corruption, he chose to publicly take a seat at a wedding funded by proceeds of corruption