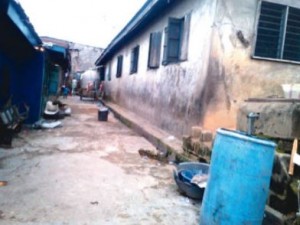 The Lagos State Police Command has arrested four boys for allegedly raping a 14-year-old girl in the Mile 12 area of the state.

PUNCH Metro learnt that the suspects, Wale Badejo, Jubril Yusuf, Olusanya Remi and Wale Oluwafemi, who are between the ages 18 and 19, allegedly abducted the victim on her way to school and took turns raping her.

According to the police, the suspects held the victim for over seven hours and threatened to kill her if she told anybody about what happened to her.

A member of the victim’s family, who craved anonymity, said the incident occurred on May 30, 2013.

She said, “She (the victim) told us that one of the suspects, who also lived in the area, had been making sexual advances to her for sometime but she always rebuffed him. The boy (Oluwafemi) and her friends then vowed to deal with her, calling her a proud person.

“She schools at Maryland and because of the distance of the school from home, she leaves home around 6:30am every day.

“On the day of the incident, the boys came on two motorcycles, grabbed her and took her to Oluwafemi’s house at Agiliti.

“The boys blindfolded her and stuffed her mouth with cloth. The boys then took pictures of the barbaric act and made a video recording which they said they would upload on Facebook. The boys further threatened to kill her if she told anybody about what had happened.”

PUNCH Metro learnt that when the victim returned home, she did not inform her parents about what had transpired for fear of being killed.

It was learnt that a resident, who had seen the rape pictures on the phone of one of the suspects, reported the incident to the victim’s parents.

It was learnt that the victim’s mother immediately reported the matter to the Ketu Police Division and the suspects were arrested on June 6.

Our correspondent, who visited the victim’s home on Dada Street, learnt that the suspects had been accused of similar offences in the past.

A resident, who craved anonymity said, “The boys have been accused of raping other girls in the area. They always get away with it and we hope they will be prosecuted this time.”

The case, however, took a sudden twist when the victim’s family said they did not want the case to be taken to court.

The victim’s mother, Iyabo, said, “The families of the suspects have been begging us since the incident occurred and we have decided to let the case go.

“I was pained when I learnt my daughter was raped, but since we are all neighbours and taking into consideration the ages of the boys, we believe it is best to forgive and forget.

“One of the suspects is even an orphan and his 75-year-old grandmother has pleaded with us. For the sake of peace, we do not want a case anymore.

“My daughter has been taken to hospital for treatment and so far, no illness has been found in her blood. She has also received counselling and she will soon resume school.”

A police situation report made available to our correspondent by the police ‘B’ operations department stated that, “On June 6,2013, the mother of the victim reported at Mile 12 Police Post that the suspects conspired and had carnal knowledge of her daughter, who is 14 years old.

“The mother said around 6.30am, when her daughter was on her way to school, the suspects grabbed her and forced her into their room at Dada Street and had sex with her one after the other. They also threatened to kill her daughter and throw her into the river if she told her parents.

“The victim said they blindfolded her and covered her mouth with cloth. The suspects have confessed and will be charged to court.”

When contacted on the telephone, the spokesperson for the state police command, Ngozi Braide, lamented the rise in cases of rape, adding that parents of victims usually frustrated efforts of the police.

She said, “We have said it many times in the past that parents of victims are of the habit of perverting the course of justice by refusing to cooperate with the police in prosecuting rape suspects.

“Except members of the public rise up against this, rape will continue.”