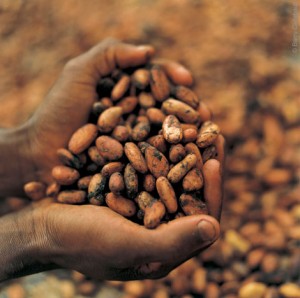 The rejection of cocoa beans from Nigeria at the international market has been blamed on fraudulent practices by some cocoa farmers and traders,

Speaking, Friday, in Ijan Ekiti, during the distribution of free chemicals, sprayers and other agricultural inputs to about 3,000 cocoa farmers in Ekiti State, Managing Director of Armajaro Nigeria Limited, Mr. Dimeji Filani said that some cocoa growers in Nigeria deliberately heaped sands and pebbles into bags of cocoa to gain advantage of weight, and this he noted that this was causing buyers to reject cocoa beans exported from the country.

While advising farmers against such unscrupulous practices, Filani urged them to always ensure proper fermentation of their cocoa beans and to dry the seeds very well to attract buyers.

“Nigerian cocoa is no longer sought after in the world market because it is dirty. Some of our farmers add dirty things including sand and pebbles to their cocoa to gain weight but this is causing buyers to reject the cocoa from our country,” he said.

He explained that the company was offering free training and giving out inputs to cocoa growers in order to increase production in the country.

He appealed to the Federal Government as well as governments in all the cocoa producing states to increase their investment in cocoa production while giving them the assurance that they could generate more fund from cocoa production than what they had thought.