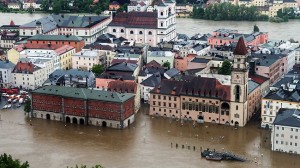 At least eight people have been killed in central Europe as floodwater inundates large areas of Germany, Austria, Switzerland and the Czech Republic.

Flooding in Central Europe has killed at least eight people, while nine others remain missing after torrential rains, and floodwater that peaked in Prague, the Czech capital, headed towards Germany, officials said.

Chancellor Angela Merkel pledged $130m in emergency aid for flood-ravaged areas of Germany on Tuesday, as the swelling waters forced thousands of people from their homes.

Merkel, visiting the flooded southern city of Passau, said the emergency cash would be disbursed in an “unbureaucratic” way because “what’s important now is that the aid quickly reaches the people”.

“I have talked to citizens who have started the clean-up and I realise it will take several more weeks,” she said. “The damage and the loss of income is a long-term matter. And that’s why our support will not cease.”

In the Czech Republic, floods have deluged Prague’s historic centre, damaging businesses and forcing a chaotic night time evacuation of the city’s zoo.

Petr Dvorak, a spokesman for the Czech Hydrometeorogical Institute, said on Tuesday that waters would soon reach Usti and Labern, about 30km from the German border.

“The last victim [in the Czech Republic] was a lady who was walking her dog in a park on Monday evening and who died under an eroded tree that fell on her,” police spokeswoman Pavla Kopecka said.

Dvorak said the waters would recede in the western part of the Czech Republic on Wednesday.

“There will be heavier rain in the east of the country and some rivers there will rise high, but the extent should be lower than here,” he added.

In Hungary, 400 people were reported to be working on flood defences in the capital Budapest, which is built on the banks of the Danube.

Central Europe last suffered similar serious flooding in 2002, which caused billions of dollars of damage and killed dozens, including 17 in the Czech Republic.