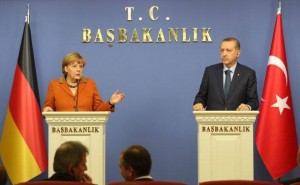 Germany and Turkey have summoned each other’s ambassadors for tit-for-tat reproaches in an escalating row over Chancellor Angela Merkel’s criticism of a crackdown on protesters in Turkey, and her reluctance to see the country join the European Union.

After Merkel said she was “appalled” by Ankara’s response to the protests, Turkish cabinet minister Egemen Bagis accused her on Thursday of blocking Turkey’s accession to the EU because she was “looking for domestic political material for her elections”.

Berlin responded on Friday by summoning the Turkish envoy to the German foreign ministry – and Turkey retaliated.

Merkel on Monday had criticised the crackdown by security forces as “much too strong.”

The chancellor also has long been sceptical of Turkey’s ambitions to join the European Union; her coalition government supports continuing membership talks, but this week blocked a decision to move forward the negotiations

Many EU countries support the opening of more negotiations with Turkey next week on its long path to membership.

They argue that Turkey, with its fast-growing economy, youthful population and diplomatic clout, would bolster the EU.

But Germany appears to be refusing to agree to open a new negotiation area, potentially the first such step in three years.

Merkel’s conservatives reject Turkish EU membership in their platform for September’s election, saying it would “overburden” the bloc because of the country’s size and economy, though Merkel has stopped short of calling a halt to accession talks.

Foreign Ministry spokesman Andreas Peschke said the Turkish minister’s accusations were “unacceptable” and Ankara’s envoy to Berlin had been summoned for consultations in the afternoon.

Turkey reacted by summoning the German envoy to Ankara, with a senior Turkish official telling Reuters: “We want to convey our views on recent developments.”

Italian Foreign Minister Emma Bonino said it was not the moment to close the door on Turkey.

“From this perspective, we must bring dynamism to the negotiating process and avoid giving into a knee-jerk reaction that hardens positions with regard to the line adopted by Turkish authorities,” she said in a statement.

Germany’s Peschke said Turkish accession talks had been held up for unspecified “technical reasons” rather than concerns about the crackdown, adding that the Dutch shared the German view.

Chapter 22 of the talks deals with regional politics.

German Foreign Minister Guido Westerwelle said this week he would like to see discussion of the chapters 23 and 24 that deal with civil rights, freedom of the press and freedom of assembly.

These have been blocked by other EU member states because of concerns about Turkey’s record on human and civil rights, especially with the police crackdown on protesters in the ongoing Turkey protests.