Home National News Odd News Girl Hurt When A Man Falls Through Ceiling While She Was Watching...
Facebook
Twitter
WhatsApp 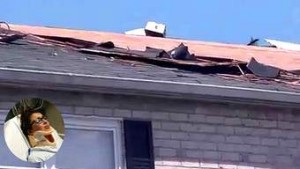 A man working on the roof of a Philadelphia apartment building fell through into one of the units, where a girl watching TV was hit by debris.

Police say the roofer landed on the couch and was not hurt. They say the 12-year-old girl was taken to a hospital with possibly two broken fingers.

Police say the 60-year-old owner of the roofing company initially told authorities that he fell through into the apartment. However, investigators say it was actually a 38-year-old employee.

Police say company owner John Paul Kravchak, of Collingdale, was charged with making false reports to police. He declined to comment to WPVI-TV.

The city’s Licenses and Inspections department is investigating.