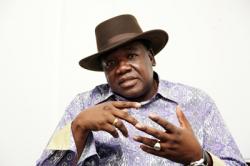 A new tourism brand identity for the nation’s tourism sector has been unveiled by the Federal Government which aims to drive the promotional activities of the government in the culture and tourism sector.

Making this known to journalists in Abuja, Minister of Tourism, Culture and National Orientation, Chief Edem Duke noted that a brand identity for Nigeria’s creative sector was long overdue given the huge tourism assets which Nigeria is known for in Africa and beyond.

The new identity, ‘Fascinating Nigeria’ which replaces ‘Good People, Great Nation,’ the minister said, has received the nod of the Federal Executive Council.

Duke said the new identity will put Nigeria at par with countries like South Africa with ‘It’s Possible’ as its brand identity, India’s ‘Incredible India’ and Malaysia with ‘Truly Asia’.

According to the minister, the official launch of the tourism brand Identity will hold on June 9 in Abuja and “will unravel several windows that make Nigeria truly fascinating, from her weather to her resilient people, the beautiful landscape, extensive cultural diversity and literature which Nigeria is known for”.

Duke, who  did not however disclose the cost of the campaign that will deploy traditional and new media of communication, stressed that the campaign will be driven by players in the private sector and will see Afro beats legend, King Sunny Ade and R&B/Pop superstar, Innocent ‘Tuface’ Idibia showcasing Nigeria’s rich cultural assets.

Director General of Nigeria Tourism Development Corporation, Mrs Sally Mbanefo, however assured that the main thrust of the corporation under her leadership would be restructuring, growing the tourism sector and tackling skills gap amongst other challenges.