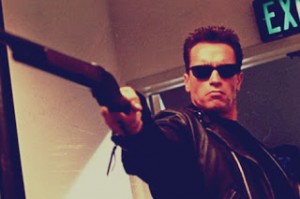 The 65-year-old actor and former American governor is to  reprise his most iconic role as the killer cyborg in movie Terminator 5!!!

During an appearance at the 21st Century Financial Education Summit in Australia, Schwarzenegger is reported to have said: “I’m very happy that the studios want me to be in ‘Terminator 5′ and to star as The Terminator, which we start shooting in January.”

Patrick Lussier and Laeta Kalogridis –  friends of ‘Terminator’ creator James Cameron – have been hired to write the script for the sequel, while Paramount has been in talks to distribute the movie.

Schwarzenegger did not make an appearance in 2009′s fourth instalment ‘Terminator Salvation’ because he was working as the Governor of California at the time.

However, his character – referred to as the T-800 Model 101 in the film – did feature briefly with a likeness of the actor’s face created with CGI and mapped over Austrian-born bodybuilder-and-actor Roland Kickinger, who portrayed the cyborg on screen.

‘The Terminator’ was first brought to screens by Cameron in 1984 and the sequel ‘Terminator 2: Judgement Day’ – also directed by Cameron – was released in 1991 and was a huge box office success.