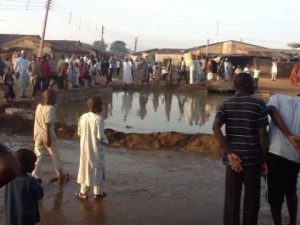 Some victims of last year’s flood in Adamawa State have claimed that they received paltry sums ranging between N200 and N240 as compensation from the government even after the Federal Government had released N500 million to them.

They have, however, said that they would not relocate to safer areas, following predictions of heavy flooding at the peak of rainy season this year.

The Kobis Ari Committee in the state was saddled with the responsibilities of both the assessment and disbursement of the N500million from the Federal Government.

However, some of the victims in Demsa Local Government Area of the state, who spoke to Vanguard on the issue, criticised the alleged poor handling of N500 million from the Federal Government.

Some of the victims told Vanguard at Gindin-Kuka ward, which was one of worst hit, that they were yet to get any form of assistance except for an offer of between N200 to N240, and asked that the matter be probed.

One of the victims, Moses Ginam, said he learnt of the N500 million assistance from Federal Government from the media, but was yet to receive any assistance except that he was told that the sum of N93,000 was allocated to affected people in his area whereby each person would get N240.

“To be candid I only read in the newspapers that N500 million was given to Adamawa State. We were told that we were given N93,000 and when you divide this money each household will get N240.

“The Federal Government should investigate this matter because those affected were not the people who benefited from the money.”

Another victim, Mr. Francis Emmanuel, also asked the government to investigate the incident , saying that, his community in Mbula chiefdom rejected the N1.5 million given to them as it was too meagre to go round.

“They sent N1.5 million to the entire Mbula chiefdom and the people refused it because if you are going to share this money to the people, each will get just a little above N200.

“Imagine somebody that lost his house and farm and he is given just N200?” he asked.

Mallam Abdullahi Gindin-Kuka, who also called for probe into the handling of the Federal Government’s largesse, said he was asked to collect N240 from the ward head as assistance from the government, but that he rejected the offer.

The Secretary to Adamawa State Government, SSG, Mr. Kobis Thimnu who was the state chairman of Quick Response Committee that handled the issues involving the flood victims, said the money was used for the purchase of 60 trucks of fertiliser and varieties of seedlings, among other things, for the farmers.

Thimnu said the measure was taken in view of the fact that most of those affected we’re farmers.

“You are aware that the state is an agrarian area and that is why we decided to give priority to food security by providing fertiliser and seedlings to framers,” Thimnu said.

He also explained that cash was given to affected local governments based on the level of destruction, adding that Lamurde was given N29 million as the worst affected.