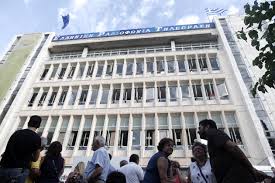 Greek state TV and radio have gradually been pulled off the air, just hours after the government said it would temporarily close all state-run broadcasts and lay off about 2,500 workers.

The actions were apparently taken on Tuesday as part of a cost-cutting drive demanded by the country’s international creditors.

The conservative-led government said earlier that the Hellenic Broadcasting Corp, or ERT, would reopen “as soon as possible” with a new, smaller workforce.

It was not immediately clear how long that would take, and whether all stations would reopen.

Shortly after the unexpected announcement, thousands rushed to the headquarters of ERT, in a northern Athens suburb, to show their support.

The decision widened cracks in the year-old governing coalition, with both minority partners condemning the suspension of ERT.

Amid show of support, however, Simos Kedikoglou, spokesman for the government and a former state TV journalist, described ERT as a “haven of waste”.

“ERT is a typical example of unique lack of transparency and incredible waste. And that ends today,” Kedikoglou said.

“It costs three to seven times as much as other TV stations and four to six times the personnel for a very small viewership, about half that of an average private station.”

During the day, ERT employees who had gathered outside its headquarters pledged to fight the decision and called for a general media blackout in protest.

It was the first case of mass public sector layoffs in the country, which has pledged to cut 15,000 state jobs by 2015 as part of its bailout commitments.

Nearly one million jobs in the private sector have already been cut.

Greece has depended on rescue loans from its European partners and the International Monetary Fund since May 2010.

In exchange, it imposed deeply resented income cuts and tax increases, which has exacerbated a recession and forced tens of thousands of businesses to close, sending unemployment to a record of 27 percent.

Greece’s POESY media union accused the government of sacrificing the broadcaster to appease its creditors.

“Bailout creditors are demanding civil service layoffs and the government, in order to meet its obligations toward foreign monitors, is prepared to sacrifice the public broadcasting corporation,” a union statement said.

Unions representing ERT workers at three terrestrial TV stations, one satellite station and its national and regional radio network said they would keep the stations on the air.