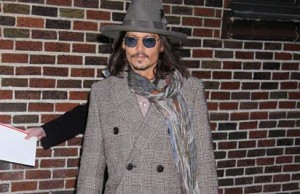 Johnny Depp has revealed he is almost completely blind in one eye and near-sighted in the other.

The ‘Lone Ranger’ star, who is rarely photographed without a pair of tinted glasses, claims he has been “basically blind as a bat” in his left eye since birth and the problem is impossible to correct.

The 50-year-old actor told the July issue of Rolling Stone magazine that all of his glasses are prescription and he relies heavily on them.

He explained: “Everything is just very, very blurry. I’ve never had proper vision.”

The ‘Pirates of the Caribbean’ star, who has two children, Lily-Rose, 14, and Jack, 11, with his ex-girlfriend Vanessa Paradis, said he can only see a few inches from his face if he is playing a character that does not wear glasses or sunglasses.

Meanwhile, the actor, who is now dating actress Amber Heard, also revealed that he thinks about retiring from Hollywood “every day”, but is unlikely to do so in the near future.

He said: “I think while I’ve got the opportunity and the desire and the creative spark to do the things that I can do right now, I should do them. And then, at a certain point, just take it down to the bare minimum and concentrate on, I guess, living life. Really living life. And going somewhere where you don’t have to be on the run, or sneak in through the kitchen or the underground labyrinth of the hotel. At a certain point, when you get old enough or get a few brain cells back, you realise that, on some level, you lived a life of a fugitive.”