Military authorities in Borno State they had arrested a group of 56 terrorists that were moving from village to village in search of food, following a tip off from civilians. 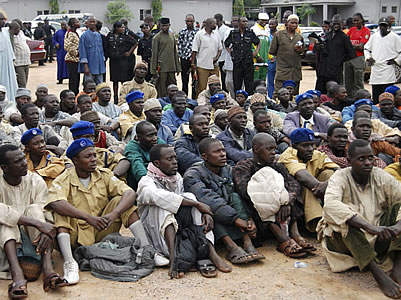 Some member of the group, according to the Director of Defence Information, Brigadier-General Chris Olukolade, who were moving around in a Toyota Land Cruiser Jeep with registration number Borno XA 428 ADM, suspected to have been stolen, were arrested at Daban Masara village while looking for food.

Olukolade said that it was believed that some stranded terrorists were keen on establishing new camps. According to him, most of them are currently in search of food, and are being trailed by military operatives.

The defence spokesman also disclosed that there were a few encounters with some insurgents in forest locations, apart from the identified and destroyed camps.

He said that the intensive cordon and search operation being conducted by the troops of the Special Forces received a major boost from civilian cooperation in communities close to locations being focused in the operation.