Home News Feed “I Had To Lose Weight Before I Could Lose My Virginity” 127...
Facebook
Twitter
WhatsApp

A young, overweight virgin who worried he would never find a girlfriend when the scales tipped 20 stone has launched himself into a fitness programme, toned up, lost five stone… and found love.

Ben Davis, 21, from Rochford, Essex, struggled with weight all his life, was bullied during his school years and found it awkward and embarrassing even talking to girls.

Bullies called him ‘the chubby kid’ and ‘fatty boom boom’, and would laugh at him when he got out of breath running up stairs.

He said: ‘I always had some friends but most of them were cousins and I would never have gone up to a girl in school because I was so afraid they would laugh in my face.

‘When I got older everyone I knew was going on nights out and wearing trendy clothes and I couldn’t think of anything worse.’

Even after leaving school, he was left embarrassed by his 19st 8lb frame, turning down nights out with his friends in favour of staying in eating junk food.

He gorged on a diet of fast food, always choosing the large option in places like McDonald’s, and never turning down chocolate bars and crisps. 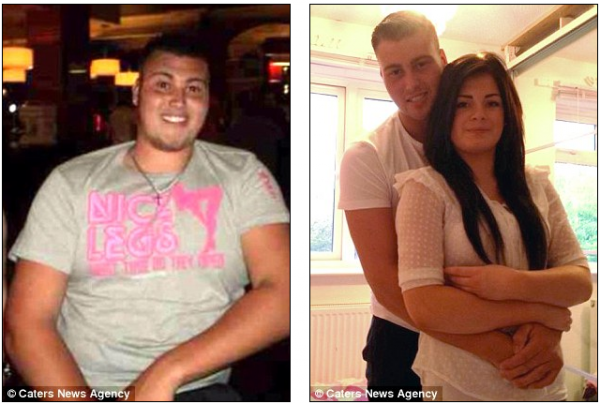 And when the weight kept piling on he used food as a comfort and ate continuously through the evenings, unable to pull himself out of his unhealthy lifestyle.

He said: ‘Instead of helping myself I just got stuck in the same rut of eating everything that was bad for me and doing no exercise.

‘My man boobs were so big I could easily have borrowed my sister’s bra to keep them up.

‘I was so embarrassed about how I looked with my top off that I used to go swimming in a T-shirt. I didn’t want anyone to see me.’

But after attending a bodybuilding event with his cousin, Ben realised that he couldn’t deal with looking the way he was.

‘I was really interested in doing bodybuilding, but my cousin told me that I wouldn’t even be able to start trying until I had lost a serious amount of weight.

‘That night I stood in front of the mirror and was repulsed at what I saw. 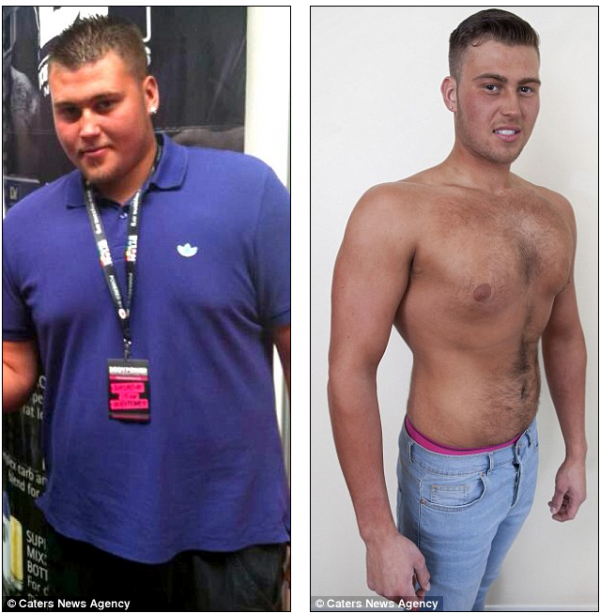 ‘I had spent the day surrounded by all these men that were toned and had amazing bodies and I was foolishly thinking that I could look like that if I just started lifting weights.

‘I then realised something needed to change as I couldn’t go on the way I was.’

He said: ‘I remember doing four weeks of really heavy duty training. I checked my weight and I had only lost 9lbs.

‘But by then I was hooked. Gradually I learned more about diet and nutrition and the weight just fell off me.

‘The raspberry ketone pills really accelerated the weight loss I was already achieving through a better diet and exercise. I could not have done it without them.’

‘I have always had weight issues since I was a kid and could never imagine anyone would ever be interested in looking at me, even after I lost all the weight.’

It was instant attraction between the couple, but Fern, 18, says that she would still have spotted him if he hadn’t lost the weight.

Fern, also from Rochdale, Essex, who is training to be a hairdresser, said: ‘I spotted Ben and instantly thought he was gorgeous.

‘I sent my friend over to tell him at first as I was too shy but as soon as we got chatting I felt so comfortable around him.

‘He showed me pictures from before he lost weight and it didn’t bother me. I got to know him and it’s his personality I fell for.’

‘He is lovely lad and we are thrilled that he has finally found happiness.

‘Our Raspberry Ketone capsules are particularly popular with young men who like to body build like Ben. They help them to lose crucial body fat so that they have a better body equilibrium when they do lose bulk.’