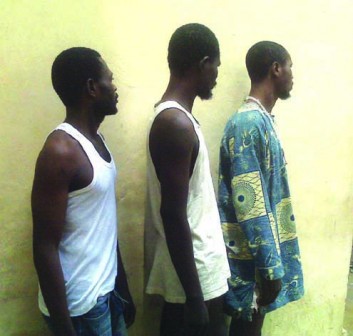 Fadipe, a member of a four -man gang, was arrested by the Special Anti-Robbery Squad, SARS, of the Lagos State Police Command.

He was arrested with his partners, Ojo Akanbi, a 30-year old Abeokuta-based mechanic; and Joshua Pius, a 26-year old indigene of Benue State while going to sell a Subaru Wagon car they had just snatched at Pansheke in Abeokuta.

The operation was carried out with a locally made double barrel gun.

The fourth suspect, identified as J-Rule, is presumed to be a student of Moshood Abiola Polytechnic, Abeokuta. He is currently at large.

Superintendent of Police Abba Kyari, who is the officer in charge SARS, said the gang was busted with the help of a reliable member of the public, who tipped the police off.

Kyari said the gang has been terrorising residents of Abule Egba and Oshodi in Lagos as well as  Ifo town.

The gang was smashed by a team of policemen led by Supol Goodluck Imuetiyan.

Imuetiyan said that Fadipe has a rich criminal record and belongs to many gangs.

Fadipe, who confessed to have snatched 10 cars in less than three months, said he was given N30,000 naira for each car and earned N300,000 for the 10 cars. “We usually sell the cars between N80 to N100 thousand. We were on our way to dispose the new one, a Subaru Space Wagon, when we were arrested,” he said.

According to a source, the SARS team ambushed Fadipe and Pius  at Iyana Ilogbo, Ogun State  on their way to sell the car with the registration number EH 150 APP.

Akande was arrested at Igbore, Abeokuta.

Kyari said the suspects will be charged to court once investigations are concluded.