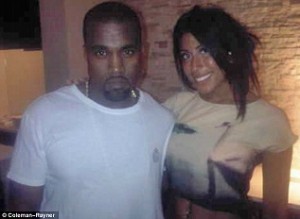 A Canadian model claims rapper Kanye West cheated on pregnant girlfriend Kim Kardashian after they met at one of his shows.

In stunning claims Leyla Ghobadi, 24, told America’s Star magazine that their fling started in July 2012 and continued even after Kim had announced her pregnancy after Kanye dismissed his relationship with the reality star as just ‘for publicity and nothing serious’.

Explaining her decision to reveal the relationship, brunette Leyla said: ‘This is going to destroy the Kardashian family. It’s bad. It’s really bad. It’s just embarrassing. But if I were Kim and about to have a baby, I would want to know.’

Kim’s representatives have denied the reports, while Kanye’s people have yet to respond.

Kanye is said to have first set his sights on curvy model Leyla when he saw her dancing in the crowd at his show in Atlantic City in July last year.

And despite Kim also being present at the gig in Revel’s Ovation Hall, Kanye reportedly instructed a member of his entourage to seek out Leyla and invite her backstage.

The rapper is then reported to have invited Leyla for cocktails at AC’s HQ Nightclub, before asking her to come back to his hotel room.

However, Leyla declined, adding to the publication: ‘I refused, as I felt it was too rushed.’

Kanye then reportedly asked Leyla and her friends, who had driven down from Montreal to watch his show, if they wanted to attend the concert the next evening, and gave them backstage passes.

And while Leyla admits she knew Kanye was with Kim at the time, she said the 36-year-old musician told her the relationship was ‘for publicity and nothing serious’.

After agreeing to accompany Kanye back to his hotel room after chatting to him backstage, Leyla said: ‘We began to make out for a while – and next thing I knew, we were both nakéd and having séx.’

The couple’s next reported meeting came in October in New York, as Kim, who had not announced her pregnancy at that point, was in Miami.

Leyla even alleges that Kanye contacted her last weekend to see if she wanted to meet up, but said that at that point she was fully aware of Kim’s pregnancy, adding: ‘I would never do that to someone.’

Kim and Kanye announced her pregnancy in December 2012, with Kanye revealing the happy baby news to the crowd during a concert in Atlantic City