The National Chairman of the Peoples Democratic Party, PDP, Bamanga Tukur, has said contrary to reports that President Goodluck Jonathan had directed him and other members of the National Working Committee, NWC, to go, he is not resigning from his post. 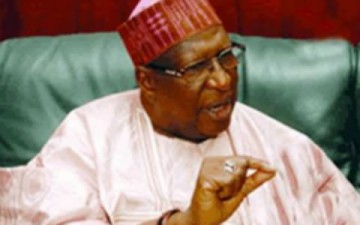 Mr. Tukur who spoke to at the Presidential Villa after a one-hour meeting with Mr. Jonathan, however, confirmed that eight members of the Committee and their deputies would resign because they were not properly elected at the March 2012 National Convention of the party.

Mr. Jonathan had reportedly asked the NWC members to quit, following a recommendation by a committee he set up to look into the crisis in the party.

The committee chaired by the Secretary to the Government of the Federation, SGF, Pius Anyim, and whose membership included four state governors ,submitted its report on Monday to the president who allegedly approved it.

The committee made its recommendation based on a report by the Independent National Electoral Commission, INEC, which observed that elections of most members of the NWC did not follow due process.

The report, however, cleared Mr. Tukur and three other members of the NWC – the National Financial Secretary, Bolaji Anani, National Secretary, Olagunsoye Oyinlola and National Auditor, Bode Mustapha. Both Messrs Olagunsoye and Mustapha have since been sacked by the court.

Three members of the PDP- Abba Yale and Bashir Maidugu, both indigenes of Borno State, and Yahaya Sule, who is from Taraba State- are in court seeking the enforcement of the report the commission.

Mr. Tukur confirmed to the journalists that his position was not affected by the report, adding that there is no vacancy in the office of the national chairman of the party. He said the meeting with Mr. Jonathan dwelt on rectifying the positions of eight members of the NWC who were not properly elected.

Meanwhile for the most part of Tuesday, there was unease at the national secretariat of the ruling party as some members of the NWC, who were reportedly asked to resign, deserted their offices.

Of the about 22 members of the NWC, only three of them were sighted in their offices- the National Treasurer, Bala Kaoje; National Organising Secretary, Abubakar Mustapha; and the National Youth Leader, Garba Chizu.

When the newsmen visited the Wadata House party secretariat located in Zone 5, Wuse District, Abuja, the staff and personal aides of the embattled NWC members were seen in groups discussing the development.

Mr. Metuh was not available to speak to journalists, although, earlier in the day, he had told the reporters in a telephone interview that the report which said that Mr. Jonathan had asked them to bow out, was not true. The PDP spokesman was, however, beside Mr. Tukur when the latter addressed journalists on Tuesday.

However, sources indicated that some of the NWC members have started moving out their personal belongings from their offices ahead of the Thursday meeting of the National Executive Council, NEC, of the party, where the party chiefs are expected to resign formally.