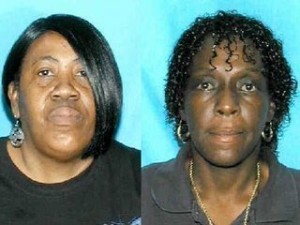 Never let your grandmother drink and drive would be a good piece of advice to give a designated driver…if he’s not 10-years-old.

Police officers in Kenner, Louisiana pulled over a vehicle traveling recklessly down I-10 westbound, only to discover that a 10-year-old boy was behind the wheel, along with his grandmother Brenda Byrd, 54 (left), her friend,  Sheila Joiner, 48 (right), and a 15-year-old passenger.

Kenner Police Sgt. Brian McGregor says that police received a call at approximately 1:15 a.m. about a 2001 Chevy Tahoe swerving and driving too slow.

“The officers spoke to both the adults inside the vehicle,” said McGregor, “and both of them admitted to instructing the 10-year-old to drive the vehicle due to their level of intoxication.

“It’s just a poor choice for a designated driver,” he continued.

Byrd and Joiner are charged with allowing an unlicensed driver to operate a motor vehicle, and contributing to the delinquency of a juvenile.

The two children were released to family members.

According to the Associated Press, the women are in custody awaiting a court appearance.