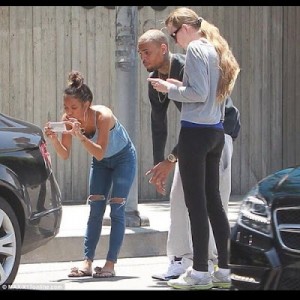 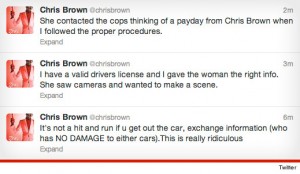 Its been one incident to the other for singer Chris Brown. Just two days ago he was accused of assaulting a woman in a nightclub and today he’s been charged with hit and run.

The singer might be facing a 4-year jail term if he is found guilty of the charge of hit-and-run. The story begins with a minor accident the singer had last month where he backed up into a Mercedes and allegedly refused to fork over his driver’s license number and gave bogus insurance info and then left the scene.

Chris Brown was charged for allegedly leaving the scene without exchanging proper insurance information.  That’s not all, CB was also charged of driving without a valid license; both crimes are punishable by a maximum of 6 months in jail for each offense.

Chris Brown as usual took to Twitter to express himself, he also just changed his profile picture to the girl’s car he allegedly hit. 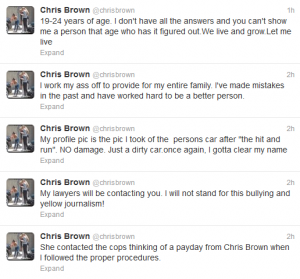