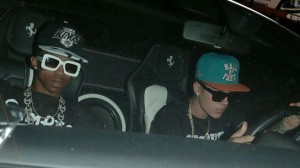 Once again, the 19-year-old drama king is making headlines for a driving-related incident. This one occurred on Monday night outside the Laugh Factory in West Hollywood. As the “Boyfriend” singer and his bestie Lil Twist attempted to drive off into the night in Bieber’s white Ferrari, the teen heartthrob allegedly hit a lurking paparazzo with his $200,000-plus luxury ride.

Making a bad situation worse, the young Hollywood star reportedly left the scene before cops or paramedics arrived, according to multiple reports, including one on X17. And what a scene it was ― the Los Angeles Police Department and Los Angeles Fire Department both responded to the call. The photog, whose leg was reportedly “crushed,” was transported to the hospital.

According to an LAPD spokesperson, they are currently investigating what they have categorized as a “traffic collision” involving a “pedestrian in the roadway,” emphasizing that it was “not a hit and run.” While they wouldn’t name Bieber specifically, they noted that they have since “interviewed all parties” involved. The spokesperson also said that the photographer’s injury was “not life-threatening.”

A rep for Bieber has not yet responded to omg!’s request for comment about theincident.

Sadly, this type of occurrence is becoming almost normal for Bieber. He was recently investigated for driving recklessly within his Calabasas, California, gated community, an incident which led to a spat with former NFL star Keyshawn Johnson, who lives in the neighborhood with his young children. No charges were filed.

Prior to that, the Canadian singer had a run-in with another neighbor, who alleged that the teen spit in his face.

And those are only driving-related incidents ― his problems with photographers are a whole other story. Earlier this month, he was slapped with a lawsuit by a Florida shutterbug who alleges that Selena Gomez’s ex had his bodyguards rough him up ― and threaten him with a gun ― in order to get the memory card from his camera. The incident is said to have occurred on a public sidewalk.

Bieber also freaked out on a group of photographers in London earlier this year, an incident that was well documented.

The young star has been on hiatus between tour dates and will get back on the road starting June 22 with four shows in Cali venues before heading to Las Vegas on June 28 and then across the country. We’re sure many folks in Los Angeles are breathing a collective sigh of relief.