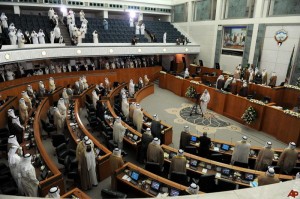 Kuwait’s top court has dissolved parliament and called for new elections after an opposition challenge to the voting system was thrown out.

Head judge Youssef al-Mutawa said the Constitutional Court made its decision after examining and rejecting the challenge.

The case had questioned the constitutionality of a change to the electoral system ordered by the emir, Sheikh Sabah al-Ahmed al-Sabah.

Mutawa said the hearing had decided not to make a ruling on the challenge, in effect leaving the emir’s decree unchanged. Al-Sabah is described as “immune and inviolable” in the constitution.

The government said the new system, which reduced the number of votes per person to one from four, brought Kuwait in line with other countries.

However, opposition politicians said the decree was unconstitutional and an attempt to stop them from forming a majority or bloc in parliament.

Al-Sabah had used emergency powers in October last year to change voting rules, six weeks before the country was due to hold parliamentary elections.

Opposition politicians boycotted the poll, and on the eve of the election tens of thousands of Kuwaitis marched in protest against the decree.

The Interior Ministry said on Friday it would not allow any unlicensed protest marches.

“We will never allow any rallies or marches outside Erada Square,” said a statement from the Interior Ministry, referring to a designated protest area opposite parliament.

State news agency KUNA said any protesters who break the law would be dealt with firmly.

Political parties are banned in Kuwait and the four-vote system helped opposition MPs form alliances in elections and gave them more clout in parliament.

Islamic, nationalist and liberal opposition groups said the emir’s decree would enable the government to manipulate election results and subsequent legislation as a consequence.

The case has international significance because political stability in Kuwait, owner of more than six percent of global oil reserves, has traditionally depended on co-operation between the government and the elected parliament, the oldest and most powerful legislature in the Arab Gulf states.

The country sits in a strategic position between Saudi Arabia and Iraq and across the Gulf from Iran.

Kuwait has been ruled by the Al-Sabah dynasty since 1750, but the opposition has repeatedly said it is challenging the constitutional system and not Al-Sabah rule per se. [Al Jazeera]