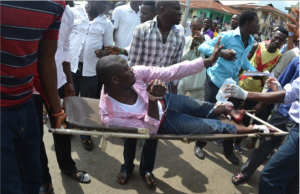 A student of the Kwara State Polytechnic, Ahmed Dayo, allegedly shot by a policeman, has undergone two surgeries to remove bullets from his two legs and is currently recuperating at the University of Ilorin Teaching Hospital.

The victim, whose purported death sparked two days of violent uprising by the students, however appealed to remain calm.

It would be recalled that students of the Polytechnic took to the streets on Tuesday, 30th May in protest of the shooting of their colleague by a policeman accompanying a bank’s bullion van.

But speaking in his local dialect, Dayo, a part time student of accountancy thanked the government and school management for their concern over his plight and appealed to his colleagues to maintain the peace as well as pray for him to walk again.

The Assistant Inspector General of police, Zone 8, Chris Dega also came to commiserate with the state governor and assess the health condition of the student.

The governor, Abdulfatah Ahmed urged the police high command to ensure that the public is kept in the know of disciplinary actions taken against erring officers in order to sustain public confidence in the police.