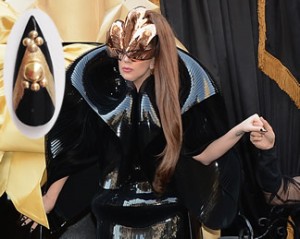 How do you prove you’re the biggest Lady Gaga fan around? Well, if you’ve got a spare$12 thousand, you could have purchased a fake fingernail once worn by the pop singer. That would be weird though, right?
An acrylic fingernail worn by Gaga was auctioned off for the tidy sum after it was originally recovered by a member of her road crew following a show. The nail was designed by Aya Fukada, and Gaga debuted the set a day before the 2012 concert, at a launch event for her perfume.
The winning bidder gets more than just a fake fingernail for their $12 thousand. The package also includes a photo of Gaga with the fingernail at the perfume event, along with one of her during the concert in which it’s missing. The seller also threw in a staff handbook from the arena, an event crew wristband from the show, a tour shirt and a letter of provenance that explains how the nail was procured.
“I noticed an object on the floor of the stage, which at first I thought was a guitar plectrum. When I picked it up, I saw it was an acrylic nail,” it reads. That’s a sharp eye for a very lucky crew worker who now has quite a bit more money.
What on earth is the buyer going to do with the nail, though? Maybe they’re building a really weird museum.
Google News