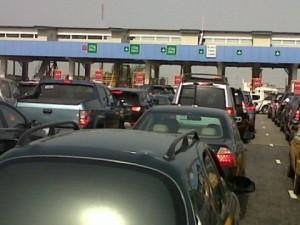 A Lagos lawyer, Mr. Ebunoluwa Adegboruwa, yesterday, filed a further affidavit before a Federal High Court sitting in Lagos, evidencing the collection of toll on the newly constructed Lekki-Ikoyi suspension bridge in Lagos.

Respondents in the suit are the Attorney General of the Federation and the National Inland Water Ways Authority, NIWA. Parties had argued their motions before the court, on April 29.

The Attorney General of Lagos State, Mr. Ade Ipaye, had told the court that the state government, had not decided whether or not to collect toll on the bridge, describing the suit as premature, since there was no evidence of tolling on the bridge.

Trial judge, Justice Saliu Saidu had reserved judgment in the suit till July 9.

Meanwhile, Adegboruwa in his further affidavit, averred that after the court had reserved judgment, the Governor of Lagos State, Mr. Babatunde Fashola, commissioned the bridge on May 29.

He averred that “the governor openly declared the bridge as a toll bridge, whereby saloon cars will pay N250.00 per trip and Sports Utility Vehicles will pay N350.00 per trip. Motorists have since June 1, been subjected to compulsory payment of the said toll on the said bridge.

“As evidence, I attach a copy of a receipt issued to me for the said toll on the bridge, which is marked exhibit A,” he averred.

Adegboruwa also filed a motion on notice informing the Lagos government of its further affidavit, and putting them on notice for its hearing, while the court is yet to fix a date for hearing of the pending motion. [Vanguard]