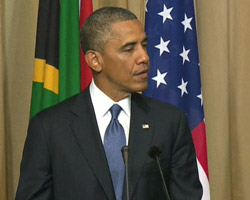 Leadership failure and bad governance has been identified as the root cause of the insurgency challenge Nigeria is currently experiencing, according to President Barrack Obama.

The American President made this known yesterday during his two days state visit to South Africa.

According to Obama, government’s inability to invest in its youth and cater for its people has resulted in frustration which led to the various conflicts the country is facing at the moment.

He declared that the upsurge of terrorist groups in Nigeria and its neighbouring countries was because “the countries are not delivering for their people and where there are sources of conflict and underlining frustrations they have not been adequately dealt with.”

The U.S President noted that what is also true is that in some ways the problem has metamorphosed saying, “we have more regional terrorist organisations like Boko Haram in Nigeria espousing an extremist ideology, showing no regard for human life.”

Fielding questions from journalists, Obama stressed the importance of governments across the world investing on youths adding that where that is not properly done, no country can succeed.

He said “in terms of human capital and young people, I think the greatest investment any country can make, not just an African country, is educating its youth and providing them with the skill to compete in a highly technological, advanced world economy” adding that “countries that do not do this well will not succeed.”

He said America is willing to collaborate with Nigeria to train teachers and incorporate technology in the education system.

“Across board we are having a rethink in education and work force training. And one of the things we want to do is to partner with a country like Nigeria and identify ways that we can provide direct value added, whether it is in helping to train teachers or helping to incorporate technology into the education process,” he said