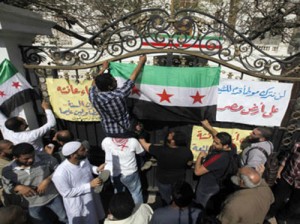 Lebanese Shiites working in the Gulf fear indiscriminate deportations by authorities infuriated by Hezbollah’s military support for the Syrian regime against rebels.

The Gulf Cooperation Council (GCC) recently warned that it will take measures against members of the Lebanese Shiite movement Hezbollah in the region following the latter’s involvement in the Syrian war.

It said it could hit their “residency permits, and financial and commercial transactions”.

Following the warning, 18 Lebanese were expelled from Qatar, a Lebanese government source told AFP on Thursday.

Despite assurances that the measures will target Hezbollah only, many Shiites who have lived and worked in the Gulf for many years fear the punishment might hit across the board, based on their religious affiliation, even if they disagreed with Hezbollah.

Other non-Shiite groups, even Christians, who could be associated with the group also fear they could be targeted.

An estimated 360,000 Lebanese work in the Gulf, according to Lebanese daily An Nahar, transferring some $4 billion annually back to the country, which has a population of just 4.1 million.

Besides the 18 deported from Qatar, Lebanese media reports have talked of “dozens” of the country’s citizens forced to leave the Gulf state.

And the Lebanese community in Saudi Arabia said at least 10 people, not all Shiite, have been targeted. Other Gulf States are expected to follow suit.

Lebanon’s embassies in the Gulf have begun to investigate reports of deportations, media reports on Thursday said.

Ali, a Lebanese Shiite living in Qatar, describes himself as secular, but is worried that the measures will target people with no links to Hezbollah.

“As a Shiite, I came here because of the bad situation in my country. I ran away because Hezbollah is holding a grip on my community,” he said.

He added that Gulf states might be justified in being wary of some people, but hoped that this fear would not affect others.

“Not all Shiites are Hezbollah supporters,” Ali said.

A staunch ally of Syrian President Bashar Al Assad, Hezbollah has backed him since protests erupted in March 2011.

But it openly declared its involvement in the war against the mainly Sunni rebels last month, and spearheaded a 17-day assault to recapture the insurgent stronghold of Qusayr near the border with Lebanon.

The GCC, which backs the rebels, warned it might add Hezbollah to its list of terrorist groups, and, in an unprecedented statement said it will target its members living in the region.

Hezbollah chief Hassan Nasrallah said last week that his movement did not have members in the area.

“There are no Hezbollah members in the Gulf,” he said, insisting that his Iran-bankrolled party is “willing to bear the consequences of the decision” to intervene in Syria.

“Does that mean that he will pay me the equivalent of the income I earn here if I get deported?” asked one Shiite expat who rejects Hezbollah involvement in Syria.

The criteria used by the Gulf states to identify someone as a member of Hezbollah have caused concern among Shiites living in the region.

Such fears hit hardest when people apply to renew their residency permits.

“We shall not spare any effort to convince the GCC to reverse its decision,” a Lebanese official in Beirut said.

The Saudi ambassador to Lebanon, Ali Awwad Asiri, confirmed on Wednesday that the GCC measures will affect the “supporters of Hezbollah… who have been misled”, but “not only Shiites”.

“A person who lives in the kingdom and respects its laws will be respected, but he who violates its regulations will face the GCC penalties,” he told the Lebanese channel Future TV.

“The first step will include scanning for financial transactions to Hezbollah, the Syrian regime and entities and people who work as fronts for them,” GCC Assistant Secretary General Abdul Aziz Aluwaisheg told Saudi daily Asharq Al Awsat last week.

“People came here to live. They respect the laws of these countries. All they want is peace for their families,” insisted Ali in Qatar. [AFP]