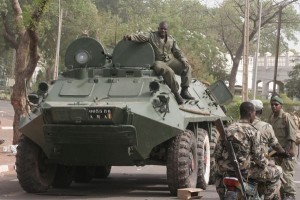 The Malian armed forces have successfully taken the village of Anefis from the Tuareg rebels, marking the army’s first victory without the help of French forces, officials on both sides said.

At least two people were killed in Wednesday’s clashes, with troops reported to be advancing towards the town of Kidal – the last rebel stronghold.

The mayor of Anefis said that the confrontation in Anefis began shortly after dawn, just west of the town.

Anefis is 113km south of Kidal, and the last locality before the provincial capital that serves as the base of the rebel National Movement for the Liberation of the Azawad, or NMLA.

The army has been inching towards Kidal for weeks, while the rebels have dug in and brought reinforcements, vowing to go to war if the military attempts to attack the strategic city.

NMLA leader Ibrahim Ag Mohamed Assaleh confirmed that on Wednesday, that their fighters were forced to retreat from Anefis, and that they lost the town to the country’s armed forces.

According to him, two of his fighters were killed in the early morning clashes, and one of their vehicles was destroyed.

In Mali’s capital of Bamako, army spokesman Lt. Col. Souleymane Maiga, who heads the army’s public relations office, also confirmed the taking of the town, but said that the death toll is likely going to rise.