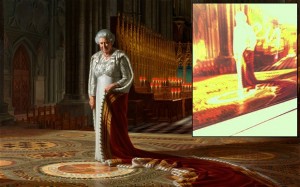 British Police said they had arrested a man after a portrait of Britain’s Queen Elizabeth was defaced with paint at Westminster Abbey on Thursday.

The painting, by Australian-born London-based artist Ralph Heimans, had been part of a display marking the 60 years since the queen’s coronation in 1953.

“In an incident at lunchtime today, a visitor to the Abbey sprayed paint on the Ralph Heimans portrait of the queen presently on display in the Chapter House,” an Abbey spokesman said.

“Until work can be done to remedy the damage, it will, very regrettably, not be possible to have the painting on public view.”

London’s Metropolitan Police said security guards had detained a suspect at the scene. Officers arrested the 41-year-old man on suspicion of criminal damage and he has been taken to a central London police station for questioning.

No details about the motive for the attack have emerged but the incident was not being linked to a week-long series of protests against a meeting of G8 leaders which Britain is hosting in Northern Ireland next week.