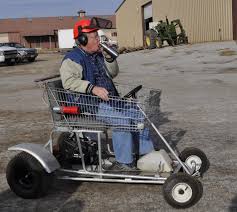 A 63-year-old man was arrested in Fairbanks, Alaska, for allegedly trying to drive a motorized shopping cart while drunk, police said.

Merrill Keith Moses, of Fairbanks, was arrested Wednesday night after attempting to drive the cart into traffic in a grocery store parking lot, the Fairbanks (Alaska) News-Miner reported.

“When an officer arrived, a store employee was holding onto the handlebars of the cart to keep the suspect from driving any further,” said Sgt. Bruce Barnette at the Fairbanks Police Department.

A store employee told police that Moses regularly drives a motorized shopping cart while intoxicated and that he has previously tried to run over store employees when they attempted to stop him.

Moses was put through a sobriety test at the scene, which he failed, police said. He was also given a preliminary Breathalyzer test, which measured his breath-alcohol content at .310 percent — nearly four times the legal limit of .08 percent.

Moses was charged with driving under the influence of alcohol, as well as refusal to submit to a chemical breath test and shoplifting.