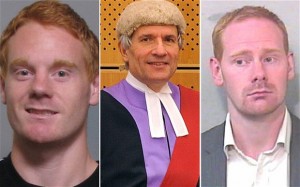 Paul Graham, 27, of Quendon Place, Haverhill, raced from the public gallery and vaulted over a gate to get behind the judge’s bench before throwing punches at Judge John Devaux in court two at Ipswich Crown Court today.

Judge Devaux had just sentenced his brother, Philip Graham, 30, of the same address, to 30 months in prison for causing death by dangerous driving.

He was flanked in the dock by three security guards throughout the hearing and an extra guard stood by the exit.

Judge Goodin described how the High Sheriff of Suffolk Sir Edward Greenwell and a local clergyman who had been sitting alongside Judge Devaux “did their best to bring the attack to an end”.

Police officers in the case managed to restrain Paul Graham before security guards led him away.

“When the judge had passed the inevitable sentence of imprisonment, you left the public gallery at speed, travelled down the side of the court very fast, vaulted over the wooden gate at the side of the bench, physically attacked Judge Devaux by punches which actually caused no physical injury,” he said.

“That conduct was disruptive, insulting and intimidating. It was a contempt of court.

“We have in this country courts which are open to the public, but what you did was an attack on justice, on the administration of justice, an attack on the rule of law.

“Any violent physical attack on the judge or any member of court staff or officer of the court must be dealt with severely.”

Richard Potts, mitigating, said his client did not accept he threw punches but accepted there had been a struggle and that he had behaved in an intimidating manner.

He added: “He has instructed me to apologise unreservedly on his behalf.

“He is a physically fit man and had he really wished to do real physical harm, there is no doubt he could have done so.

“It was a spontaneous act borne out of high emotion. It was an outpouring of grief.

“There is going to be a substantial diminution in the family as a result of both brothers being in custody.”

He added that Paul Graham had a university education and was qualified as a security guard and personal trainer.

Philip Graham was convicted after a trial earlier this year of killing father-of-two Derek Foster, 37, when his car hit the victim’s motorcycle on the B1054 in July last year.

Mr Foster’s widow and family were in court at the time of the attack.

Court reporter Jane Hunt, who witnessed the drama, wrote in the East Anglian Daily Times: “In a matter of seconds, and before anyone had time to react, the man raced past the press bench where I was sitting and past lawyers involved in the case and vaulted a wooden gate leading to the area where Judge Devaux was.

“During the melee Judge Devaux’s wig and glasses were pulled off and after the man, who was ranting and shouting abuse throughout the incident, was pulled away from him the judge was led from court by staff looking shaken but apparently uninjured.”