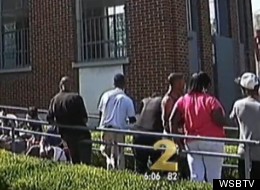 A man trying to rob Atlanta customers waiting to buy the latest LeBron James sneakers was killed by a shopper who continued to wait on line after the shooting, according to NBC News.

The robber, a man who has not been identified yet, sauntered up to people before dawn in Atlanta, waiting in line to purchase the $180 Lebon X Denim kicks by Nike on the day they were released, CNN reported. The shoes, endorsed by the star forward on the Miami Heat, could be sold for a much higher price on eBay.

Witnesses said the thief pulled out a gun and tried to rob the crowd. The shooting happened at 5:30 a.m. — six-and-a-half hours before the shoe store Wish opened in the Little Five Points neighborhood, the Atlanta Journal-Constitution said.

“One of the victims pulled his own handgun and shot the suspect,” Officer John Chafee said in a statement reported by WXIA. “A number of witnesses were interviewed and this appears to be self defense.”

The suspect ran a few yards and fell to the ground dead, the Associated Press reported.

Witnesses praised the shooter for defending them.

“He [the shooter] really stood up for all of us,” said Taylor White. “I salute the homie that did that.”