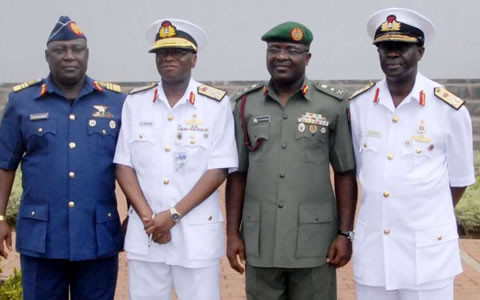 The military authorities on Sunday assured Lagos residents of improved security in the city.

Ibas cited the recent aborted attempt by suspected Boko Haram members to simultaneously bomb 16 designated landmarks in Lagos as a clear indication of the military’s efforts to be on top of security challenges.

Ibas, who was also the special guest of honour at the event, assured that the military would always be on alert to prevent such occurrences.

Ibas noted that but for intelligence report gathered by security agencies, including the State Security Service, the sect had attempted to plant terrorists cells in the South West with Lagos as its headquarters.

He said the recent failed attempt to bomb Lagos was a sad reminder that evil men do not rest.

“Evil men do not rest, so we must always be at an alert in protecting the territorial integrity of Nigeria.

“True, Nigeria is faced with diverse challenges which challenge its autonomy. Therefore, there is hardly an arm of the armed forces that is not contributing to this effort.

“It is also glad to note that the armed forces and sister services are working together in inter-agency cooperation, information gathering and sharing.”

Commending the efforts of officers and men of the force, he stressed that the Air Force was committed to ensuring that the activities of evil men were curtailed to the barest minimum.

The highlight of the dinner was the ritual toast to the Commander-in-Chief of the Armed Forces, President Goodluck Jonathan.

The lights were put off first before the toast in line with military tradition. (NAN)