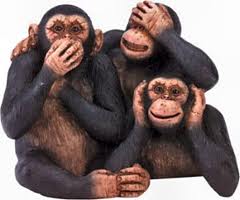 A mild drama played out last Friday in Onitsha Magistrate  Court 3,  when three monkeys and their owners, Mohammed Garuba, 22, Dauda Usman, 25 and Nurah Mohammed, 22 were arraigned on a two-count charge of conspiracy and robbery.

Court proceedings were momentarily halted as the courtroom was thrown into confusion and uncontrollable laughter when the case was mentioned and the giant monkeys and their handlers were docked.

The three men and their monkeys were alleged to have robbed a senior police officer (names withheld) attached to Zone 6 Calabar, who was on transit.  According to the prosecutor, the police officer was traveling when he ran short of cash and went to one of the banks in Onitsha to make some withdrawals.  After the transaction, he was said to have run into the people doing monkey magic, who had been accused of robbing unsuspecting members of the public with their wild animals in the past.

When the case was called, the police prosecutor, Sgt Everest Chike attached to SARS Awkuzu appeared for prosecution, while a counsel announced his appearance for the accused persons and the monkeys.

The prosecution told the court after they had taken plea that the crime was committed against the state around Upper Iweka, Onitsha when the accused, on the pretence of show display, commanded the wild animals and they forcefully pounced on the senior police officer, tore his pocket and  robbed him of N50, 000.

After the robbery, the monkeys, acting like being tele- guided, threw the money to one of the owners, who immediately ran away from the scene and is now at large.

The defence counsel faulted the charge, stating that the charge was only to intimidate his clients, even as he argued that the charge that brought both human beings and wild animals before the court was inconsistent.

The counsel went further to pray the court to strike out the case on the ground that the complainant was not in court and had told him that he was no longer interested but when the prosecution replied him from the point of law, the court, after viewing the matter critically, asked the counsel to seek for the bail of the defendants.

Sgt Chike told the court that the victim was ever ready to come up with his evidence even as he urged the court to temper justice with mercy in giving the bail condition, his appeal was to enable the defendants meet up with the bail condition so that their monkeys could be released unbound to them for safe keep since there was no zoo in the state to shepherd the monkeys by the police.