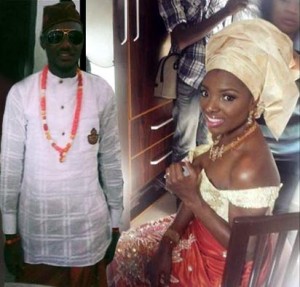 A Justice namely  Mohammed Idris of  the Federal High Court sitting in Lagos has fixed  October 16, 2013 as the date for the beginning of a court trial in a N120 million copyright suit filed against Africa’s best – Innocent Idibia, his wife Annie Idibia and their manager, Anthonio Anifite over  photographs allegedly taken at the recent traditional wedding of the musician and his wife in Akwa Ibom State.

Emmanuel Okolo, who is an Abuja based professional photographer is filing suit alongside his studio, Papilonmexy,  against Tuface and his entire team.

Here are his grievances; Emmanuel is asking for six reliefs, two of which include N100 million in general damages and N20million in exemplary damages.

At the hearing of the case yesterday, neither the superstar artiste TuFace nor his wife were neither present or even represented in court but their manager Anifite who is the second defendant was represented by his counsel, J.O Uttute.

The agitated judge openly reprimanded J.O Uttute after the latter claimed that he had filed his defense when he had not done so.

“You told me that you have filed your response, but looking through here, there is nothing to that effect. And you are even smiling. Do you think you are here to joke? Never come to this court again if you are not prepared. You don’t even know when the case was filed and you are not prepared for it,” said the judge.

Also,  the plaintiff’s counsel,  Habeeb Oredola expressed worry over the inability of Tuface and wife to be present at the hearing or even have themselves represented by a counsel after they were served with the writs of summon.

In the writ of summon, the photographer Emmanuel Okolo and his studio claimed they were contracted by TuFace’s wife through a third party, identified as Ms Chineze Anyaene to take photo shots at the traditional wedding held in Eket, Akwa Ibom state in March, 2013.

The plaintiff said, he was reluctant at the beginning since the offer was coming through a third party, but later accepted after he was convinced that the offer was actually with the blessing of the first defendant.

Annie Idibia was said to have later contacted the photographer after the wedding and demanded for the printing of 10 of the high resolution pictures taken.