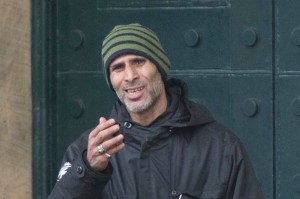 Regime Ahmmad, who pulled a knife on daughter Shyvonne after she shared a bed with a male pal, dodged jail, as Sheriff Valerie Johnston said her hands were tied over sentencing.

A sheruff yesterday told of her fears for a teenager whose Muslim dad pulled a knife on her – but let him walk free.

Valerie Johnston said her instinct was to send Regime Ahmmad to prison but added that her hands were tied over how long she could jail him for.

She said Ahmmad, 49, would be “released in a very short period of time due to the system that operates” and said that offered little future protection to his daughter Shyvonne, 18.

Sheriff Johnston said: “I found this quite a disturbing case. I have concern for his daughter.”

Ahmmad was found guilty of threatening to kill the teenager for inviting a male friend to stay overnight with her at her home.

Shyvonne told Perth Sheriff Court her dad pulled a knife out while giving her a row.

She said he berated her for letting her pal Matthew Davidson sleep in her bed, even though it was her mum’s home and her mum had agreed to it.

She added: “My father said a woman shouldn’t share a bed with a man they are not married to.

After that, there was a continuation of what he had been saying about how I shouldn’t show my legs. An Islamic woman is not supposed to show her legs past the knees and stuff like that.

After he showed the knife, there was about half a minute’s conversation and then I ran out the room. He said I was supposed to be a Muslim and, if I wasn’t, he would kill me and then himself.

I didn’t want to argue with him because he had a knife. He has always been very vocal. He would say he would chop my legs off and things like that.”

Shyvonne told the court her dad said her behaviour would bring shame upon him and Muslims would take against him.

“I was pretty hysterical at the time,” she said, adding that she ran to her neighbour’s home and reported what her dad had done.

Neighbour Shirin Sharokli-Moghadam, 29, said: “Her dad said she had to make up her mind whether she was going to be a Muslim and then he pulled out a knife.” She said Shyvonne was crying and shook for an hour.

Ahmmad’s ex-wife Georgina, 54, said the accused was staying with the family when the incident took place and was trying to convince his daughter to be Muslim.

“He did want her to be Muslim but she wasn’t willing,” she said. “He has a belief in his religion that there is black magic.” The court was told that Ahmmad had also spoken of “evil spirits”.

Ahmmad told the court he kept a knife to ward off demons which pursued him. He said he was expecting someone from Egypt to come to exorcise him.

Last night, Shyvonne said: “I wouldn’t want this to turn into a thing about Islam because people can be very small-minded. But my father has a very warped idea of what Islam is.

I now want to put it all behind me. I don’t want to see my father and I have no intention of speaking to him ever again.”

Ahmmad, of Imrie Place, Perth, was found guilty of presenting a knife to his daughter and threatening to kill her in Magpie Way in the city on May 8 last year.

Sheriff Johnston told Ahmmad: “You assaulted your daughter, presented a knife at her and terrorised her. That’s not acceptable, particularly for a father.”

Ahmmad was put on a community payback order for two years.