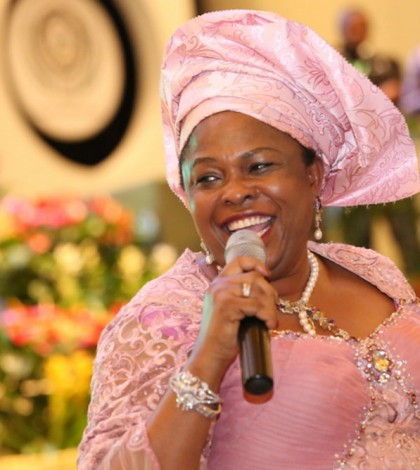 The First Lady, Dame Patience Jonathan, has attributed the outstanding performance of the Federal Government in various sectors of the economy to the input of women in the cabinet.

Jonathan said this in a short remark at a dinner organised for women in commemoration of this year’s Democracy Day in Abuja.

She commended them for making Nigerian women proud in the mid-term report released on Thursday by the Presidency on the first half of the administration’s four-year tenure.

“Two days ago, the President read his mid-term report to Nigerians. He and his team have done very well. Women are the powerful people in that cabinet.”

While noting that women were well represented in governance, the first lady thanked President Goodluck Jonathan for giving Nigerian women the opportunity to prove themselves.

“We thank God and Mr President for giving women a chance. Since independence, this is the first time women can walk tall and talk where men are talking.

The President’s wife urged women to take up the challenge of bringing peace back to the country.

“Let us, as women, urge them to shun evil behaviours and desist from anything that can bring the country down. We should be proud of our country.

“We should preach peace and be peaceful in our homes, local governments, states and the country. Our watchword should be peace. We should move from door to door to preach peace.

“Without peace, there will be no development and we need development. Women are saying enough is enough. We don’t want our children to die again.’’

Other dignitaries at the occasion were the former First Lady, Hajia Ajoke Muhammed, the wife of the governor of Anambra, Mrs Margret Obi; Majority Leader, House of Representatives, Mrs. Mulikat Adeola-Akande and wife of the PDP National Chairman, Mrs. Fatima Tukur.

Others were the PDP National Women Leader, Dr Kema Chikwe; female members of the Federal Executive Council, female presidential aides, female lawmakers and wives of service chiefs, among others. (NAN)