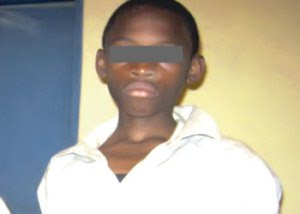 The story sounds bizarre and confounding but it is true. The discovery of the body of three-year-old Bose Olaniyi in a well in the neighbourhood has thrown the residents of Ilupeju-Isokan area of Akobo into mourning. But the most shocking aspect of the sad occurrence was that the suspect in this case is no other person than the deceased’s cousin, Rilwan Olaniyi, who confessed to have acted on the promptings of his mother to kill his cousin!

How could 14-year-old Rilwan, a Primary Six pupil, ever think of killing his little cousin? Crime Reports gathered that Mrs Bola Olaniyi and Mrs Morenike Olaniyi are two women married to two brothers. The former, who is Rilwan’s mother, is married to the elder of the two brothers and due to circumstances, the latter and her husband with their children started living in the house bulit by the elder brother.

It happened in the evening of June 17. Little Bose’s mother, Morenike, a mother of four, reportedly went to buy yam flour in the neighbourhood to prepare dinner for her children. She left her children behind but the youngest, Bose, cried after her mother, insisting on following her, as if she had a premonition of what would befall her that night. Morenike however sent her daughter back, telling her to go and stay with her siblings. And with that she waved a final bye to her daughter as she never saw her alive again. Dinner for the household later became a forgone issue.

Crime Reports gathered that by the time she came back, she could not see her daughter. As neighbours joined her in the search, they later found the body of the girl in a nearby well at about 11.30p.m. Policemen from Akobo were said to have been called and they in turn contacted fire services which came to bring the body out of the well. A boy, whose name was given as Lanre was said to have revealed that he saw Rilwan carrying the missing girl.

After much prodding, Rilwan reportedly confessed and said it was his mother who asked him to kill the girl because Morenike, the deceased’s mother, was not according her the respect due to her. The boy and his mother were promptly arrested by the police while his father, who was almost lynched to death for what the mob termed his inability to handle situation in his home, was also rescued by the police and kept in custody.

When speaking with Crime Reports, Rilwan confirmed that he was the one who threw the baby in the well but denied that it was his mother who sent him. “Bose was at the backyard looking for her mother while her siblings were at the passage. I held her by the hand and took her to the well. There was no one around then so I threw her inside.” When asked why he acted so callously, Rilwan said he was prompted by a strange spirit.

His mother, Mrs Bola Olaniyi (32), a mother of five told Crime Reports: “Rilwan is my first born. On the day of the occurrence, I was not at home. I went out to avoid a debtor and left my four children at home. My sister-in-law children were also at home and Rilwan was yet to return from school.

“I returned at about 7.30p.m. and met Rilwan holding my last child outside. That was when my sister-in-law came and starting calling for her daughter, saying that she could not see him. I asked her whether she followed her when she went to buy something but she replied that she left the little girl at home.

“We went to inform the police and they told us to come back after 24 hours, advising that we should go and search the neighbourhood. We continued searching . My husband came when I called him and as he tried to calm his brother’s wife who had become hysterical, she held on to his shirt, saying that it was our son who carried her daughter.

“A neighbour joined us in the search and when he opened a well nearby our residence, we were shocked to see the girl inside, floating. We went to the residence of the chairman of the landlords association and while there, someone came and said the mob was beating my husband because my son said he was the one who threw his cousin in the well. I was advised to stay back to avoid mob action. That was when my son seized the opportunity to lie against me that I was the one who said he should commit the act.

“How can I do such a thing when I have my own children? It is true I had issues with my sister-in-law but they were the normal disagreements you would find among extended family members. They were nothing so serious as for anyone to think of such evil. I did not send my son to kill his cousin.

“Later, when policemen were interrogating him, he told them that he mentioned my name out of fear, saying that he threw the girl in the well because my sister-in-law used to call him a thief. I have suffered over that boy too much because of his stubborness. I am a muslim but I attend churches, fasting and praying because of him. I am even afraid to stand beside him because I never knew he could conjure such an evil plan and carry it out.”

Confirming the incident and the arrest of the suspects, the police image maker in Oyo State, Olabisi Ilobanafor, told Crime Reports that the case had been transferred to the State Criminal Investigation Department, Iyaganku for further investigation.