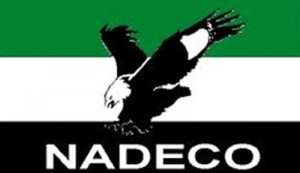 National Democratic Coalition, NADECO, has called on the Federal Government to provide an acceptable constitution before conducting the 2015 general elections, following the power tussle between the North and the South over which of the regions should produce the next President.

The group also stated that the immediate dismantling of constitutional structures would provide an answer to the country’s myriad of problems.

Speaking yesterday in Lagos, at a colloquium convened to review the Epetedo Declaration of June 12, 1993 presidential elections, Chairman of NADECO, Rear Admiral Ndubuisi Kanu said Nigeria should be put in order before the 2015 elections.

“Regarding the elections planned for 2015, NADECO notes with concern the ominous rhetorics in the atmosphere wherein some elements who, prior to the 2011 elections, promised to make Nigeria ungovernable should power not return to them, are now threatening massive bloodshed should power again fail to return to them; there is a response to them from another bloc, equally threatening catastrophe should power leave them.

“Having identified the unworkable unitary ‘Constitution’ of Nigeria as the source of the many intractable plagues of Nigeria, and now faced with a situation in which, whoever wins a 2015 presidential election, “blood will flow”, NADECO, with a grave sense of responsibility, raises a question as to the wisdom of embarking on such an election without first working out an acceptable constitutional arrangement, more so since whoever wins that election will govern with the same disputed ‘constitution’, plunging the country further into further abyss, and faster towards anarchy.

“NADECO unequivocally states that the answer to Nigeria’s myraid of problems lie in the immediate peaceful dismantling of the constitutional structures which were erected and operated in negation of the soverignty of the people. The process for that peaceful dismantling is by the convocation of a Soverign National Conference the same way South Africa did via CODESA to ease out the Aparthied Constitution.

“The alternative for the country Nigeria will be disorderly, yet justifiable retrieval of sovereignties by the Ethnic Nationalities individually or in formations/groups of their choice and in a manner or manners that they may choose, which may be based on understandable violence.

NADECO pointed out that enemies of June 12 are still in power, and still masquerades as champions of democracy.

“Many who connived with the clique in those debasing and disenfranchising years are in power today, even masquerading as champions of democracy. Such include those who chaired Abiola’s winning party, SDP. There are others in all arms of government and even amongst the progressives who ought to really search their conscience, if the survival, well-being and progress of Nigeria is truly in their agenda.

“NADECO asserts that the violent agitations in Nigeria have their roots in these constitutional grievances and cannot be peacefully addressed otherwise than by a holistic engagement with the issues by a way of a Sovereign National Conference of ethnic nationalities. In refusing to initiate this only plausible non-violent mechanism, opponents of the SNC have pushed the country into a violent, disorderly debate of the same issues.”

Also speaking on the theme of the event titled: Affirmation of the Peoples Sovereignty, Mr. Fred Agbeyegbe said: “We must turn round to those who now insist that they are the owners of the sovereignty upon which the ethnic nationalities of Nigeria erect their right to a Sovereign National Conference and say to them, first, that that providential prescription is the only reference to the word “Sovereignty” in the 1999 Constitution; second, that it is emphatic that it “belongs to the people of Nigeria”; third: that all the section affords them are “powers and authority”; fourth, that the powers and authority in question are all of their powers and authority.”