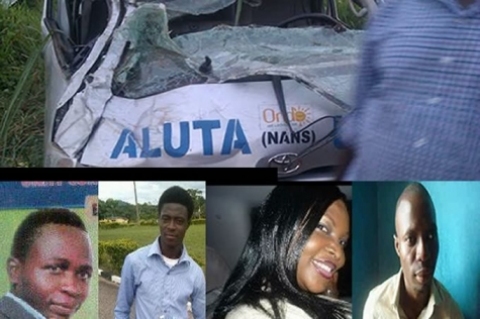 The National Association of Nigerian Students (NANS) on Friday declared seven-day mourning for  five of its officers who lost their lives to a road accident on Thursday.

The NANS President, Mr Yinka Gbadebo, told reporters in Lagos that the mourning would be observed as from Monday.

The NANS Senate President, Mr Donald Onukaogu, and four others died at Ariam-Ndioru Junction on the Umuahia-Ikot Ekpene Road, on their way to Uyo on an official mission.

The accident involved a truck and a mini-bus belonging to NANS.

Gbadebo noted that the students were on their way to the University of Uyo to intervene in a crisis that erupted in the school.

Gbadebo said that he was to be part of the NANS contingent to Uyo but had to step down to be able to attend another official assignment.

He said that the union would work in conjunction with the families of the dead officers for their burial, since they died in the course of duty.

Gbadebo regretted that more than 25 Nigerian students had lost their lives this year to unrest in higher institutions of learning. (NAN)