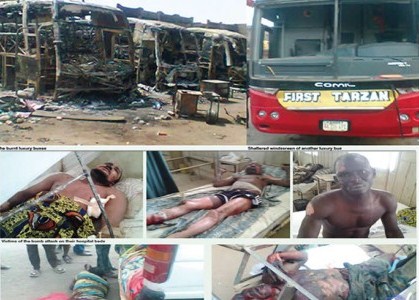 Kano State will today witness the convergence of Ndigbo in their numbers at the luxury bus park in Sabon Gari in the state capital as they honour their kinsmen who died in the terror attack on the park March 18.

Special prayers for the repose of the souls of the victims will be said during an interdenominational service which will take place at the attack scene with relatives of victims and survivors in attendance.

The Christian Association of Nigeria (CAN), Kano State chapter will coordinate the spiritual programme that will be presided over by its chairman, Bishop Ramson Bello.

It was gathered that most Igbo traders in Kano metropolis will not open their shops as a mark of respect for their departed kinsmen.

However, a community leader, Igwe Boniface Ibekwe, said that commercial activities will not be affected as those who wish to go about their normal businesses can do so without let or hinderance.

Today’s memorial service in Kano coincides with the Movement for the Actualization of Sovereign State of Biafra, MASSOB’s sit-at-home order to all Ndigbo especially in the South-East in memory of their kinsmen slain in northern Nigeria.