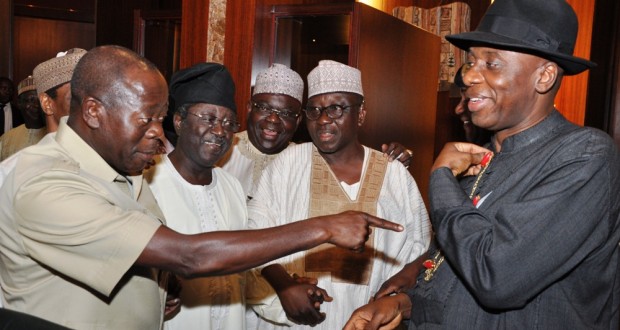 Despite their recent public spat and purported animosity towards each other, the governors of Rivers and Plateau States respectively, Rotimi Amaechi and Jonah Jang, were sat next to each together at Thursday’s National Economic Council (NEC) meeting in Abuja.

The meeting proved even more unpredictable as Amaechi and Jang who are engaged in a leadership tussle of the NGF, have never sat down together at the same table since the disputed May 24th election until today.

Amaechi, who arrived the meeting venue before Jang and on getting to his seat declared: “So we are sitting together, authentic and the fake chairman.”

Following the entry of Jang some few minutes later, the two governors greeted and shook hands.

However, a mild drama ensued when Edo State governor, Adams Oshiomhole, arrived the venue and jokingly said in full glare of reporters’ cameras while pointing at Amaechi that, “This is my chairman,” and to Jang, he said, “This is PDP faction chairman.”

Also, Niger State governor, Mu’azu Babangida Aliyu, who noticed the new sitting arrangement said: “This is nice o. Somebody is trying to be diplomatic here.”