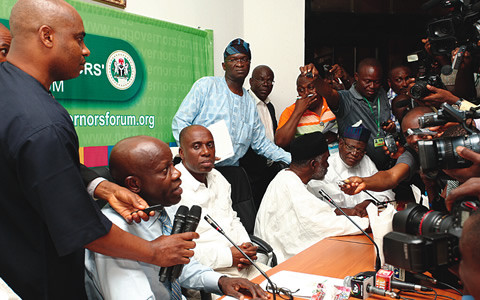 The Arewa elders have expressed serious concern over the controversies trailing the election of the chairman of the Nigeria Governors Forum (NGF) and the political crisis that has pitched President Goodluck Jonathan against some members of the Peoples Democratic Party (PDP).

The elders wondered how the political leaders would organise the 2015 general elections if they cannot put their houses in order first.

The National Publicity Secretary of the Arewa Consultative Forum (ACF), Mr. Anthony Sani who spoke Friday in an interview, said, “the controversy demonstrates the wisdom of those who submit that democracy is yet to take root in Nigeria.”

“So, I plead with the governors to appreciate their place in the order of things and together with Mr. President enthrone democratic ethos in the polity. This is because they are expected to act both lodestars and bellwether.”

However, while commending the Jonathan-led administration on its effort to improve the power sector, the railway and few other areas of the economy, Sani stated that “the real issue is a need for appropriate balancing between macroeconomics and microeconomics.”

Said he: “The performance of government policies and actions are measured by how much they affect the standard of life of the people. This is to say there should be effects on unemployment figures, reduction of poverty level, reduction on infant and mortality rates, reduction in illiteracy and improvement in life expectancy. On the whole, socio economic indices that include Misery Indices and Human Development Index should also be made public before realistic appreciation of the effects of the Transformation Agenda can be ascertained. And so, I want to say that good as figures on the macro economics may appear, there should be improvement on peoples welfare.”

He continued: “It may well be that the administration has tried in its campaigns against corruption. But the pension scandals and management of the reports on petroleum subsidy and reports by Ribadu Committee does not give cause for cheers. More distressing is the manner the judiciary delivers more of technical justice than substantive justice.

“There is need to reform the judiciary in favour of substantive justice. Democracy may differ in forms, but when it comes to its elements of liberty, justice and common decency, democracy does not differ. So, those who are redefining the three elements of democracy can as well reinvent the wheel or redefine the truth. And that is why we say full fledged democracy with strong institutions is yet t take root, given the prevailing strong man or big man syndrome and ethnic nationalism that threatens to supplant party politics.”