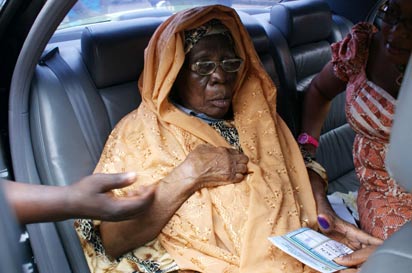 Governors of the 19 northern states under the aegis of Northern States Governors Forum (NSGF), has commiserated with former national leader of the Action Congress of Nigeria (ACN) and former Governor of Lagos State, Asiwaju Bola Tinubu, on the demise of his mother – Alhaja Abibatu Mogaji – who died yesterday evening at the age of 96.

Chairman of the Forum and Governor of Niger State, Dr Babangida Aliyu, described the late Mogaji’s death as a big loss, saying she would be sorely missed by members of her family, the people of Lagos State, and indeed all Nigerians.

The Forum described the late Iyaloja of Lagos as a towering business and women’s rights figure who not only brought tremendous change to the business and political landscape of Lagos but of Nigeria and beyond.

“Coming at this time of unprecedented security and socio-economic challenges, when the guidance and advice of all our great leaders like Alhaja Abibatu are needed, her death is a big loss,” the forum said in a condolence message signed by Mr. Aliyu’s spokesman, Danladi Ndayebo.

The Forum, however, urged Nigerians to take solace in the fact that the great values she left behind would serve as a guiding light not only to the people of Lagos but to the entire nation.

The Forum also prayed God to grant eternal rest to the soul of the Tinubu matriarch, and to provide succour for the bereaved family members and the entire people of Lagos State.