What could have been another  major disaster for the country was narrowly averted in Uyo, the Akwa Ibom state capital, on Friday night, following a sudden interruption in electricity supply at Ibom airport when an Arik aircraft, with its landing gear fully engaged, was just about to touchdown. 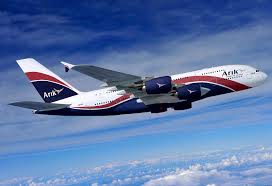 Passengers on Flight W3 533 said there would have been a devastating air accident had the American pilot not been vigilant enough to hurriedly terminate his landing plan and re-engage the engine to quickly fly back to the sky.

The passengers were full of praises to God for saving their lives as their flight returned to the nation’s capital after authorities of the airport failed to provide an alternative source of power supply to enable the plane to land in the Akwa Ibom state capital.

On the flight were an estimated 50 passengers, including  the chairman of the National Human Rights Commission, Prof. Chidi Odinkalu, and some unnamed federal lawmakers, believed to be heading to Uyo for a retreat.

Mr. Odinkalu confirmed the incident. Contacted on the telephone early this morning, a relieved Mr. Odinkalu said, “Thank God we survived. If it had been a rainy night with thunderstorms, anything could have happened to us. Some people need to answer questions over that incident.”

The flight, originally scheduled for 6:25 p.m, left Abuja at about 7 p:m.  It returned to Abuja at 9: 35 p.m. after hovering in the sky for over 30 minutes in expectation that authorities at the Uyo airport would be able to light the runway to enable it to land.

Some passengers on the flight told PREMIUM TIMES that the plane was only 500 metres from the tarmac in Uyo when the airport suddenly blacked out.

“As he re-engaged the engines to go up, the pilot informed us that the control tower had told him there was a power outage at the airport,” a passenger on the flight said. “So they needed a little time to switch to alternative source. So we were told.

“Meanwhile, the aircraft was in a holding pattern over Uyo. So we flew around and  waited. After about 15 minutes, the pilot explained that the man responsible for turning on the back up power unit was about 10-15 minutes from the airport and had been reached. So he was on his way back to switch it on. So we kept holding.”

It is not clear why the technician was not at his duty post at a time the airport was in operation and planes were still expected to land.

The passenger said after another 15 or so minutes, the American pilot announced that the control tower had informed him  that the man expected to switch on the generator had arrived and that power would be restored to the airport in 10 minutes. So the plane held on, hovering in the sky.

But fifteen   minutes later,  PREMIUM TIMES was told,  the pilot again informed passengers that even though the technician to switch on the generator had arrived, the airport authorities were unable to locate the keys to the source of the alternative power unit.

Officials didn’t say who took the keys away and at what point they realized the keys were missing.

They however advised the pilot to return to Abuja.

“Gratefully, the evening was devoid of Uyo’s potentially destructive thunder and rainstorm,” a passenger said. “The information we later got was that the airport’s alternative power source was not in working condition and that they actually lied to the pilot for all the time we hovered in the sky.”

But the ordeal of the passengers was far from ending. On arrival at the Abuja airport, the stranded passengers found, to their irritation, that the Arik Ground Manager had disappeared from his desk, and that there was no one to provide information or arrange transportation or lodging for them.

Some junior staff of the airline, who were approached, simply told the visibly angry passengers they had no idea what to do about the situation,  as they were not given any instruction by their superiors, a witness said.

“Thirty minutes later and very responsible looking men in their suits and expensive silk ties have been reduced on the tarmac to vigilantes using every available part of their anatomy to preclude the pilot from closing the doors and heading off on another trip,” one of our sources said, while still at the airport. “The Arik Manager remains disappeared and this place is going to degenerate.”

The General Manager, Public Affairs of the Federal Airport Authority of Nigeria (FAAN), Akin Olukunle, as well as Arik Air spokesperson, Banji Ola, could not be reached for comments early this morning.

Nigeria’s Aviation Investigation Bureau (AIB) had in some of its reports blamed avoidable human errors and dereliction of duty by public officials working in the aviation sector as major reasons for the loss of hundreds of lives in air crashes in Nigeria.

The bureau, which is saddled with the responsibility of investigating air accidents in the country, stated these in its reports after the crashes involving two airlines, Sky Executive Aviation Services (SEAS)  and Sosoliso airline in 2002 and 2005 respectively.

Some of the human errors identified by the AIB as causes of plane crashes include non-lightening of runways and airfields (as it happened last night), poorly constructed drainage culverts, inaccurate information by the control tower, lack of proper certification of radio operators and poor supervision of aircraft imported into the country.