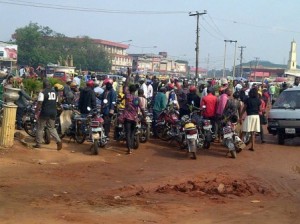 A recent ban on the activities of commercial motorcycle riders, popularly called Okada, in Edo State the state government, Wednesday provoked a protest in Benin City.

The State Governor, Comrade Adams Oshiomhole had in a state-wide broadcast on television stations in the state Tuesday, announced the ban of the use of okada as a means of transportation in the three local government areas of Benin metropolis, citing security reasons.

The protesters who turned out in large numbers, elicited the sympathy of people as youths and others joined them in the protest at Ring Road.

Human and vehicular traffic was disrupted by the protest, as all entrance to the ever busy Ring Road were barricaded with every available objects.

Workers and other commuters who had planned to beat the early hour rush were, however, disappointed as they could not overcome the heavy traffic jam caused by the protest.

One of the protesters, Emmanuel Okobia, who spoke to P.M.NEWS at Ring Road, said the government erred in the ban of their activities without serving them notice early enough.

“Oshiomhole got this one wrong this time. How can he announce a ban on Okada after just one week notice? We are all family men and bread winners, where does he want us to get our daily bread from?

“Criminal activities in the state have gone down considerably. There is no more kidnapping and armed robbery, so his argument that it is because of armed robbery and kidnapping does not work,” Okobia said.

The protesters further lamented losses they were made to incur, saying that just two months ago, they were forced to pay the sum of N2000 each for jackets that were never given to them.

“Just two months ago, they forced us to pay N2000 for a jacket which they claimed will identify real riders from hoodlums, which they did not even give us. At the end of the day, it was stickers that they gave to us. So who is deceiving who now? Oshiomhole should think twice.”

Soldiers and anti riot policemen were deployed everywhere around the metropolis to ensure the protests remained under control.

The Okada riders, however, vowed to take their protest to the Government House to see Governor Oshiomole.